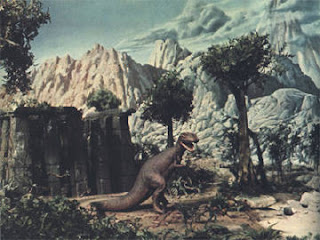 For some who find that their story doesn't fit the facts, it's easiest to ignore those facts or even change them to fit the story (I think that's a bastardization of someone's quote, but I don't know whose). That's exactly what a group called "Answers in Genesis" has done with the Creation Museum that is set to open on Monday in Kentucky.

The phrase "junk science" is used a lot by conservatives to dismiss any theory that could cost big business their profits, but this new museum is the true definition of the term. Ignoring all known evidence, the curators of this fantasy land have concocted dioramas that depict humans frolicking with the dinosaurs.

Dinosaurs, we're told, were described in Genesis and co-existed with our earliest ancestors. Noah even brought pairs of the beasts onto his ark. That kind of compressed timeline, which runs counter to the fossil record, is a necessary evil when you view the Bible as an accurate historical document of the Earth's creation 6,000 years ago.

The exhibits described in yesterday's New York Times remind me of the kitschy 1970s Sid & Marty Krofft kids show Land of the Lost (see the picture above), where a modern day family is transported to a world filled with dinosaurs, furry little caveman-like creatures, and nasty reptilian villains called Sleestak.

Unfortunately, by abandoning the metaphorical and mythical qualities of the Bible in order to interpret it literally, these religious fanatics actually rob the stories of their power. In trying to convey their twisted take on history, all they're left with are the absurdities of a Saturday morning cartoon show.

Here are excerpts from the New York Times review of the museum, and a link to the full article:

... Outside the museum scientists may assert that the universe is billions of years old, that fossils are the remains of animals living hundreds of millions of years ago, and that life's diversity is the result of evolution by natural selection. But inside the museum the Earth is barely 6,000 years old, dinosaurs were created on the sixth day, and Jesus is the savior who will one day repair the trauma of man's fall.

It is a measure of the museum's daring that dinosaurs and fossils — once considered major challenges to belief in the Bible's creation story — are here so central, appearing not as tests of faith, as one religious authority once surmised, but as creatures no different from the giraffes and cats that still walk the earth. Fossils, the museum teaches, are no older than Noah’s flood; in fact dinosaurs were on the ark. ...

Posted by Francis Scudellari at 9:54 PM

What a classic. It never fails to amaze me how far some will go to prove they are right. Even when they get is sooooo wrong.