Immigration debate: Echoes from the past 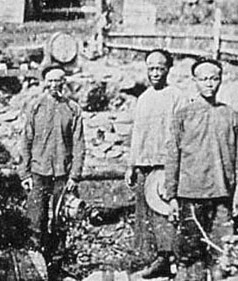 According to Answers.com, May 6th is the anniversary of an interesting little piece of legislation from our past that illustrates the bad policy that can arise from xenophobia. The law was called The Chinese Exclusion Act of 1882 and as the name implies, it prevented the Chinese from emigrating to the US for 10 years. It was an over-reaction to a misplaced fear that Chinese workers were "stealing" American jobs, and reflected racist attitudes more than economic realities. It also set a bad precedent and lead to the exclusion of other immigrant groups.

There are obvious parallels to today, as policymakers seek to coddle an equally xenophobic public. The targets of choice for the current errant villification are the Latino immigrants, but the laws being proposed will affect all groups. Latinos, of course, make up a much larger segment of the population than the Chinese did in 1882. They also have much more political muscle behind them, so the battle won't be so one-sided.

Here is a short description of the Act from US History Companion as posted on Answers.com:

The Chinese Exclusion Act of 1882 was the first significant law restricting immigration into the United States. Those on the West Coast were especially prone to attribute declining wages and economic ills on the despised Chinese workers. Although the Chinese composed only .002 percent of the nation's population, Congress passed the exclusion act to placate worker demands and assuage prevalent concerns about maintaining white "racial purity."

The statute of 1882 suspended Chinese immigration for ten years and declared the Chinese as ineligible for naturalization. Chinese workers already in the country challenged the constitutionality of the discriminatory acts, but their efforts failed. The act was renewed in 1892 for another ten years, and in 1902 Chinese immigration was made permanently illegal. The legislation proved very effective, and the Chinese population in the United States sharply declined.

American experience with Chinese exclusion spurred later movements for immigration restriction against other "undesirable" groups such as Middle Easterners, Hindu and East Indians, and the Japanese. The Chinese themselves remained ineligible for citizenship until 1943.

Click here to read more information on the Act from other sources.
Posted by Francis Scudellari at 12:54 AM