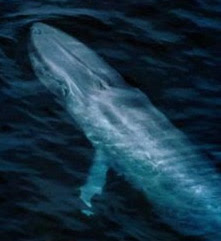 Episode 7 of the BBC's Life of Mammals series is titled "Return to the Water" and it is one of the most interesting segments to me because of the extreme adaptations that these animals have made in order to carve out a niche in watery environments.

The degree to which they've adapted varies, as does their lifestyles. The Desman, an insect eater that is mostly closely related to a shrew, has a "snorkel" similar to an elephant's trunk and webbed feet. It swims along river beds snatching up prey amidst the gravel and pebbles but spends equal amounts of time in and out of the water.

The Sea Otter spends all of its time in the water -- eating, sleeping and breeding there. Mostly closely related to the weasel, it has adapted to life in the water by developing thick insulating fur and feet that act as paddles. To stay in place and protect its territory while it sleeps, it wraps itself in kelp. And, in one of my favorite scenes from the series, we see how they've figured out an ingenious way to open their favorite food: oysters. They pick up a rock from the bottom of the sea, rest it on their stomach, and bang the oyster against it -- all the while floating casually on their backs.

Sea Lions and Seals have limbs that have evolved into flippers, bodies that are more streamlined for swimming, and layers of blubber for insulation. They are descended from an animal somewhere between a weasel and a bear, and breed and birth on the land/ice but spend the rest of their time at sea.

Manatees have lost even more of the typical mammal traits and spend all of their time under water in creek beds. They are thought to have a common ancestor with the elephant, and are large, slow moving grazers with limbs that are completely adapted to swimming.

The most incredibly evolved sea mammals are of course the great whales. It's hard to imagine, but scientists believe that they were originally a deer-like, land-based animal that returned to the sea. Over millions of years whales evolved the equipment they needed to lead a life in the water. There are vestigal leg bones still present in the Blue Whale, buried deep in the muscle, but most other traces of their past have disappeared. They are the largest animal ever to have existed on the earth, and that size is directly attributable to a life at sea, as no bones could have supported such bulk on land.

It makes you wonder what humans might evolve into if we were forced to live at sea ... maybe the concept of a mermaid isn't so farfetched.
Posted by Francis Scudellari at 6:52 PM