Favorite Song of the Day: EMI 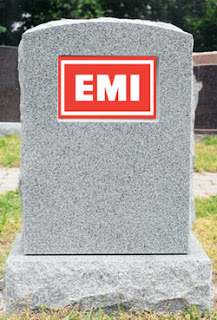 The music industry behemoth EMI has been in the news recently on a few different fronts. Because of declining profits, the corporation is up for sale (Warner Music ditches backing band to line up solo EMI bid). One of its biggest name performers, Sir Paul McCartney, is sidestepping the label to pursue distribution through Starbucks (New way to a hit CD as old rockers wake up and smell the coffee). And it struck a deal with iTunes to make its catalog available free of Digital Rights Management (DRM) copy protection (EMI's DRM-free catalog may arrive this week on iTunes).

All three of these stories illustrate the difficulties the old guard of the music industry face in the digital age. At first they used copy-protection and legal wrangling to try to put the brakes on a technology that allows free distribution of content. Now, as they watch their empires slowly crumble, they're trying to catch up and embrace digital music sales. Unfortunately for them, it's a battle they can't hope to win. As an article in today's New York Times describes it:

But very few albums have gained traction. And that is compounded by the industry’s core structural problem: Its main product is widely available free. More than half of all music acquired by fans last year came from unpaid sources including Internet file sharing and CD burning, according to the market research company NPD Group. The “social” ripping and burning of CDs among friends — which takes place offline and almost entirely out of reach of industry policing efforts — accounted for 37 percent of all music consumption, more than file-sharing, NPD said.

(from Plunge in CD Sales Shakes Up Big Labels)

Music sharing sites that allow bands to connect with their fans directly, and cut out the exploitative mega-corporate middle man, are the future. Networking services such as RawRip and Last.fm are two examples.

Digital music creates the possibility for artists to reach a potentially unlimited audience — their songs spinning out to the far reaches of the web. We've still got to sort out a way for them to leverage that newfound ability and make a decent living, but that's true of a lot of occupations in modern society. 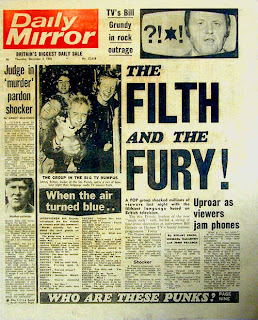 The Sex Pistols certainly had their share of problems with music labels during their short-lived career. They penned the following little ditty back in 1977 to get back at EMI, which cut them loose from a deal due to bad publicity.

There's an ulimited supply
And there is no reason why
I tell you it was all a frame
They only did it cause of fame
Who?
EMI, EMI, EMI

Don't you judge a book just by the cover
Unless you cover just another
And blind acceptance is a sign
Of stupid fools who stand in line
Like ...
EMI, EMI, EMI

Unlimited supply, EMI
There is no reason why, EMI
I tell you it was all a frame, EMI
They only did it cause of fame, EMI
I do not need the pressure, EMI
I can't stand those useless fools, EMI
Unlimited supply, EMI
Hello, EMI
Goodbye, A&M
Posted by Francis Scudellari at 11:32 AM