A "Fountain" of ideas 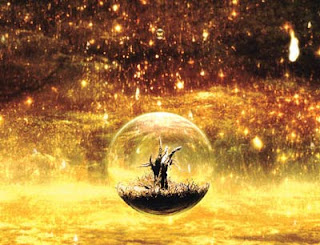 Last night (and again this morning), I watched the DVD of Darren Aronofsky's "The Fountain" and was extremely impressed with the film's ideas, vision and beauty. (See the IMDB page for the particulars of the film). Last year, I read about the film's struggles to make it to the screen and the innovative techniques used to deliver the special effects within a reduced budget (see Wired's The Outsider from November), but I never got a chance to see it in the theater. I wish I had ... as wonderful as the film is on a small screen the larger format certainly would have added to the impact.

"The Fountain" is a science fiction film with a different visual take on space and time travel. The cosmos are represented through a technique of "microphotography" in which the interaction of liquids in a petri dish are filmed and expanded. This lends an organic feel to the movement of the gases of the nebulae that surround the story's space ship. That ship is itself interesting, breaking with the traditional imaginings of such vessels. The main character, Tom Creo (portrayed by Hugh Jackman), glides through space in a transparent orb.

What really captured my attention about the film, however, were its ideas. "The Fountain" is a love story that spans 1,000 years and, very basically, thematically it's a meditation on mortality. There are a number of plot spoilers that follow, so tread carefully if you're planning to watch the film (or run recklessly if you're not convinced yet it's worth it).

The action flows from 3 interwoven and parallel time periods. The present day story follows Tommy Creo's attempts to discover a medical breakthrough that can save his wife Izzy (played by Rachel Weisz) from the brain cancer that is consuming her.

In the midst of her illness, Izzy writes the mythic story of 1500 AD Spain and the conquistador Tomas's quest to find the Mayan Tree of Life and its promise of immortality. We're transported with Tom back to Spain and the Guatemalan jungle as he visualizes the passages from Izzy's manuscript. Along the way, Izzy informs Tom about the Mayan underworld of Xibalba a dying star to which all earthly souls depart in order to be reborn. Her book is an attempt to come to terms with dying, and it's also a way for her to guide Tom toward acceptance of her death as well as his own. She leaves the last chapter unwritten, and it's her directive to "finish it" that haunts Tom throughout the film.

The third timeline occurs in the outer space of 2500 AD as Tom, apparently having discovered the path toward personal immortality, travels toward a dying star in a last attempt to bring Izzy back. Hoping to fulfill the Mayan myth of Xibalba, he transports a tree that holds Izzy's soul to a nearby nebula. On his journey he relives the events of his past, our present, in the hopes that he can fix what went wrong. These segments have a dream-like quality and leave open the question of whether Tom has actually survived into the distant future or is in the midst of a mental struggle to come to terms with mortality.

Both the Mayan and the Biblical creation myths figure prominently in the story. It is the Bible's version that frames Tom's quests. There were two trees in the Garden of Eden: The Tree of Life and the Tree of Knowledge. By eating of the Tree of Knowledge and achieving consciousness, humanity lost access to the fruit of immortality. The film recounts Tom's attempts in the three different time periods to rediscover that lost tree.

Izzy, on the other hand, operates from within the Mayan framework and tries to embrace the concept of "death as an act of creation." According to the myth, First Father died in order to give life to the universe as his blood fed the Earth and the Tree of Life sprouted from his belly. His head was placed in the sky by his children and became Xibalba. For Izzy, death is the "road to awe," as we return to the universe and become one again with all of creation. Only when Tom can grasp that idea will he be able to write the final chapter to the book, and their story.

The story's non-linear unfolding across different eras reminded me of Vonnegut's Slaughterhouse-Five and Billy Pilgrim's becoming "unstuck" in time. The events of the past, present and future (myth, reality, and dream) occur concurrently yet aren't absolutely fixed. Tom is able to finally achieve the happy ending Izzy wanted him to author, and that leads to a pretty thrilling conclusion.
Posted by Francis Scudellari at 3:13 PM