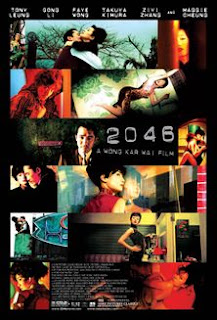 Like "The Fountain," which I wrote about earlier, "2046" is a recent film now on DVD that deals with love, science fiction, and time travel. Written and directed by Hong Kong's Kar Wai Wong (see the film's IMDB page for full credits), the movie focuses on the writer Chow Mo Wan as he tries to make sense of failed relationships past and present by looking through the lens of an imagined future. Plot details follow below, so prepare to get spoiled.

The film's title refers to one of Chow's novels, and in his writing it is a destination time and place where nothing changes and from which none have returned. The significance of the number extends into the real world, as it's the year that marks the end of China's 50 year promise to preserve Hong Kong's autonomy after having assumed sovreignty from the British in 1997. On that level the film could be a political metaphor, but I don't know enough of the history to try to grasp it.

Back on the personal level, Chow, like his characters who travel to 2046, has a love that he wants to revisit (the platonic affair with Su Li Zhen that was portrayed in the director's earlier film "In the Mood for Love"), and through his writing he gradually realizes the trap he's created for himself. Since returning to Hong Kong from Singapore on the heels of the failed relationship with the second Su Li Zhen (aka Black Spider), Chow has become a playboy pursuing endless one-night stands rather than emotional commitment. The emptiness of his lifestyle especially hits home on subsequent Christmas eves, when he feels the acute need for warmth and company.

Among the many women in his life, three leave their mark on Chow and find their way into his fiction as androids: LuLu who he knew in Singapore and who ends up getting stabbed by a jealous boyfriend; Bai Ling who loves him despite his best efforts to insult and objectify her; and Wang Jing Wen the assistant he secretly loves before convincing her to go to Japan to pursue her boyfriend.

Ultimately he's unable or unwilling to emotionally connect to any of them. Toward the end, Chow states that timing is important in love -- meeting the right person doesn't matter if it's too soon or too late. That timing however is mostly of our own making. Until he can move beyond the love that haunts him, all women will arrive either too late or too soon.
Posted by Francis Scudellari at 8:59 PM

The Fountain, though divided into three separate histories, has nothing to do with time travel.

There is time travel for the viewer :).