Gingrich vows to convert all of us heathens 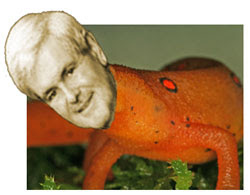 Newt Gingrich is back on the national political stage after his "contract on America" ran its course in the 90s. He gave a speech at Jerry Falwell's Liberty University in order to eulogize the deceased preacher, and stake out a claim for the religious right's backing in the 2008 election.

Newt, as always, is full of nicely skewed insights on what's happening in the country. Despite the fact that the White House has been in the hands of the most fanatically Christian president in our history, Gingrich is feeling persecuted these days. We "radical secularists" are dragging the nation down.

Funny thing is, after complaining about how difficult the non-believers are making it for the faith based community, "slimy like a" Newt said something pretty interesting. Here are the quotes from today's Washington Post:

"In hostility to American history, the radical secularists insist that religious belief is inherently divisive," Gingrich said, deriding what he called the "contorted logic" and "false principles" of advocates of secularism in American society.

"Basic fairness demands that religious beliefs deserve a chance to be heard," he said during his 26-minute speech. ...

"Anybody on the left who hopes that when people like Reverend Falwell disappear, that the opportunity to convert all of America has gone with him fundamentally misunderstands why institutions like this were created," Gingrich told reporters.

I guess that cherished religious freedom really only pertains to the Christian community ... and I'm guessing even some of those folks, such as the Catholics, might be excluded from Newt's universe of believers.

We all need to back off and let these poor oppressed fundamentalists have free reign to convert all of the heathens and followers of false gods before the US is hit by more of God's wrath (we did have that Hurrican Katrina coming, after all, with the crazy anti-Christian things we've been up to).

[the period of sarcasm has now passed, we return to the blog's normal nasty tone ...]

Let's hope that the Newt crawls back under the rock from which he emerged pretty soon.
Posted by Francis Scudellari at 11:34 PM