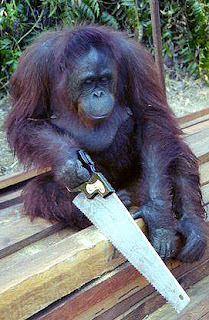 Episode X: Food for Thought is the last segment in the BBC's Life of Mammals (LoM) series, and in it the producers go ape. The focus is on the largest of the primates, the great apes, and their characteristic abilities to mimic behavior and to invent tools. Such talents make it easier to pass down knowledge through the generations and create "cultures."

Here are the main players in this final chapter:

Orangutans - In capitivity these large, tree-dwelling apes can learn to use our carpentry tools and LoM shows them playing with saws and hammers. In the wild they have a schematic knowlege of how to navigate the forest and can track the dates that various fruits ripen. They're usually loners in the wild, but that's the result of food scarcity rather than a lack of sociability (there are humans who can certainly relate). In Sumatra, for example, where the food is more plentiful, Orangutans live in groups and have shared intelligence -- fashioning tools to get at harder to reach food.

Chimpanzees - Said to be human's closest living relatives, LoM gives us a glimpse into the life of a Chimp colony in Uganda that is one of the largest known. The group interactions range from tranquil social grooming to the more violent repercussions of male rivalry. The males in the colony form organized hunts where bonds are created and alliances firmed up. The social relationships and politics within the community are complex and still not well understood, but they seem to mirror our own with a more primative brutality.

Humans - The series asks the question, What made our ancestors rise on two feet, stand upright, and walk? One theory postulates that it was a changing climate where trees became scarcer and primates had to walk or wade longer distances between them. There's also the possibility that early humans stood upright in order to pursue four-legged prey across these newly formed grasslands. In an amazing sequence, LoM follows members of an African tribe from the Kalahari desert who practice the ancient and mostly forgotten art of the "persistence hunt." Using their intelligence as a weapon, they track and pursue a Kudu for miles until the animal collapses from exhaustion. It's a chase that early humans embarked on knowing that on two-legs they could endure longer than their prey.

As the series draws to a close, it summarizes human development in order to reach conclusions about our future. The early human hunters eventually learned to domesticate animals and crops. They traded in their migratory life to settle down and create farms and cities. In these new societies, not everyone had to be involved in food production and some could devote themselves to the arts and sciences that reshaped the world. Mastery of the food supply allowed humans to thrive and spread to all corners of the earth. But as the human population has increased to over 6 billion, its in danger of over-reaching the limits of the earth's resources.

The series suggests that the only way to fix this situation is to control our population growth. Of course Nature has its own ways of checking populations, and that's a scenario that we should try to avoid. If we are to do so, we'll need to use our "big brains" to develop the sustainable technologies that can help us either more efficiently meet the needs of our growing population or expand to previously inhospitable climes -- such as the oceans or outer space.

Just like our great-ape relatives, we'll need to rely on our proven abilities to learn and innovate in order to succeed. We may even find ourselves evolving new abilities in order to adapt to the challenges ahead.
Posted by Francis Scudellari at 2:20 PM

Do you think you can get that ape to rewire my kitchen?