Proof of a virgin birth ... in Sharks 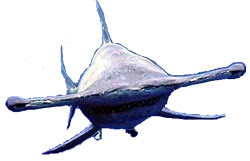 Today, a group of scientists reported the virgin birth of a hammerhead shark in an Omaha zoo. The process of asexual reproduction, also known as parthenogenesis, has been observed in some species of insects, reptiles, birds and fish, but this is the first real proof that it also occurs in sharks. As if we males weren't feeling useless enough these days ...

No word yet whether three wise sharks have shown up with gold, frankincense and myrrh.

Here are excerpts from the story that appears in the Washington Post:

A team of American and Irish researchers have discovered that some female sharks can reproduce without having sex, the first time that scientists have found the unusual capacity in such an ancient vertebrate species.

Their report that sharks can produce asexually through the process known as parthenogenesis is being published online today in the British journal Biology Letters. Researchers have observed parthenogenesis in certain species of birds, reptiles, amphibians and bony fishes, but the new finding suggests that vertebrates' ability to reproduce without sex evolved much earlier than scientists had thought

Posted by Francis Scudellari at 11:15 PM