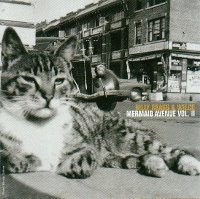 Election season is upon us again, along with its many frustrations. Here in Chicago, the competition for least evil is particularly fierce in a couple races, and the temptation to vote for 3rd parties, whether slated or not, is great.

With that in mind, I was listening to Mermaid Avenue, Volume II by Billy Bragg & Wilco and was reminded of the following little gem of a song.

It was written as a campaign song for Florida folklorist and activist Stetson Kennedy. There is a Wikipedia article with background on the man and his writings. That article indicates the song was written for the 1952 Florida governor's race, but the Whose Florida? site seems to be more accurate in describing it as a write-in campaign for the 1950 US Senate race against Democrat George Smathers.

I done spent my last three cents
Mailing my letter to the President
Didn't make a show, I didn't make a dent
So I'm swinging over to this independent gent

We'll find us a peace job equal and free
We'll dump Smathers-Dupont in a salty sea
Well, this makes Stetson Kennedy the man for me

There is an official Stetson Kennedy Website that actually links to the song.

I especially like the bit about taking the profit out of war. It might be an oversimplification, but it certainly has resonance to what's going on today. Vote your conscience on November 7, but definitely make sure you vote.
Posted by Francis Scudellari at 12:59 AM No comments: 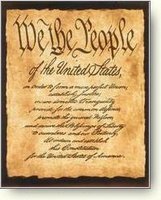 For those who missed the story while the media bombarded them with coverage of the Mark Foley scandal, our so-called representatives in Washington DC voted last week to undermine the Constitution it was their duty to uphold. The so-called "Detainee Bill" passed Congress and became law, pushing us further down the path away from our once cherished democratic ideals.

This lovely little piece of legislation allows our dear leader Emperor George W the right to classify anyone he chooses as an "enemy combatant" and deny them due process. It strips away the right of habeus corpus from citizens and non-citizens suspected of aiding terrorists. What constitutes aid, or even terrorism, is left to the unchallenged wisdom of our benevolent ruler. These unfortunates can be detained indefinitely and tortured without charges ever being formally brought against them.

Here are a couple good opinion pieces on the implications of this bill:

Fatal Vision: The Deeper Evil Behind the Detainee Bill
By Chris Floyd

With the recent passage of the "Security Fence" bill (see Bush signs bill paying for new border fence) and approval of Bush's use of warantless wiretapping (see House Approves Warrantless Wiretap Law), as well as the earlier reauthorization of the Patriot Act, one has to take a serious look at the state of our democracy. Bush's leadership, like his mouthpiece Fox network, has become unchecked and unbalanced. The world has been neatly divided into those "with us" and those "against us" -- but the definition of "us" has been considerably narrowed. Take a closer look at what Bush has put in place over the past 5 years and ask yourself if you really belong in the "us" category.

This administration, its minions (Republicans), and its enablers (Democrats in Congress) have set about dismantling social programs that benefit the broader public in order to serve the best interests of the corporate money machine from which they came and to which they all will return. As the Constitution gets torn apart piece by piece, those who recognize the perversity of these policies will find themselves more in danger of being lumped into the "against us" category. It's a short trip from there to the nearest secret detention center.
Posted by Francis Scudellari at 7:31 PM No comments: