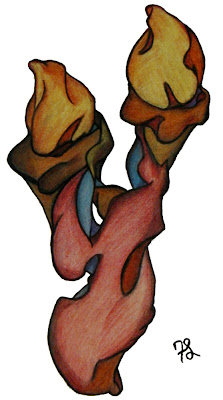 Today, I continue with my (admittedly plodding) attempt to write poems based on titles suggested by the spectacularly inspiring comments from my post Interactive Exercise. I apologize, retroactively and in advance, for turning so many folks into unwilling abettors of my strange creative process.

The verse below is based on Claire's very intriguing phrase Redundant Torch. I'll soon post a companion drawing for it to add even more redundancy.

If I could tell
Which way this flame
Will leap (up, down?)
When the big gust
(Finally?) comes
I'd hold a torch
(Above, below?)
To catch its spark
Mid-hop (fleeing?)
And keep it in
Kindling limbo
Where it will burn
(Safely?) until
I can coax it
(Willing or not?)
Back inside me
Posted by Francis Scudellari at 7:33 PM 9 comments: 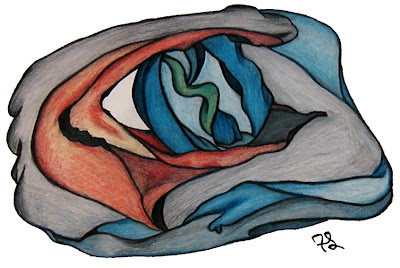 Posted by Francis Scudellari at 4:24 AM 8 comments:

All ages show
By Francis Scudellari

"To see life in its totality is a very special gift."

"He won't appreciate it."

"Maybe that's because we don't give him any."

A slow trickle of warm drool tickles Jonah's chin and startles him awake. For a brief moment the raised edges of the trailing liquid sit clearly on the front of his necktie. Then, as quickly as he notices it, the drop sinks into the dyed material; its outline lost in the twisting shapes on the cloth.

Embarrassed by his mouth's impolite leak, Jonah nervously turns toward the window and searches the mirrored faces. Had anyone seen? The glass, at this hour black-backed by the stubborn night, usually casts a perfect but inverse depiction of the cramped car's interior. Today, oddly, the portrait is indistinct.

The picture of row upon row of cushioned pews that stretch along each tin-can wall contains only strangely featureless faces. Jonah sees no eyes glancing disapprovingly at him. He sees no eyes at all; nor noses, lips, and lashes.

Even the bloodless hands that wrap themselves around the steel poles welded from seat top to ceiling are lacking form. No knuckles, wrinkles, ragged nails or wispy hairs are visible on the pale blobs.

But it's only the human flesh that lacks its customary identifying marks. Everything inanimate stands out sharply in the yellow light cast by the dim, domed bulbs that cling to the arched ceiling. He can make out the fibers of scarves and the creases on pant legs.

Grown brazen by confusion, Jonah rotates on his seat and stares at the man seated next to him. He sees only a swirl of browns, pinks and yellows, as if the wool-clad shoulders support a color wheel in constant motion.

Jonah strains his eyes into focus. Like a thumb on the flipped pages of a book, his gaze halts the face in flux. The salt and pepper coloring of the middle-aged man who he remembers boarding the train suddenly returns. The nose takes its recalled bulbous shape. The chin sprouts its noted stubble.

Then Jonah blinks and the image becomes as unsettled as his mind. Intricate networks of cracks spider-web their way across parched patches of the man's skin. Cheek bones push their way out and draw the now loose skin up under them. Once burning eyes cool and recede into shadowy caverns.

Another blink shifts the man's face back in time to the smooth, pudgy countenance of a teen. Frightened, Jonah spins away from his neighbor and stares at his own face captured in the dark glass. His features, drained of color, are otherwise unchanged. He peers deeply into the dilated pupils, and the glimpse of a new path flashes before him.
Posted by Francis Scudellari at 9:43 PM 5 comments:

Doodle Week wraps up with the most classic of artistic themes: Doodle Body. After another successful stint of doodling, all of the wonderful participants have earned a moment to kick back and savor the memories. For on the seventh day, we rest. 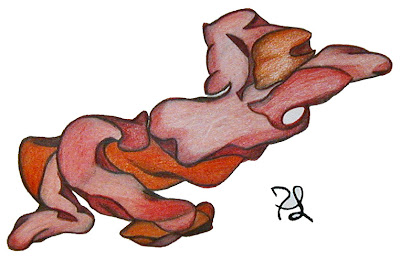 It's the penultimate day of Doodle Week, and today's theme is Doodle Pet. If you've been following along since the last doodle-extravaganza, then you may remember that I previously drew a portrait of Albert the pug. Since that day I've had several friends ask about a drawing of his sister Lucy. Their patience is finally rewarded. 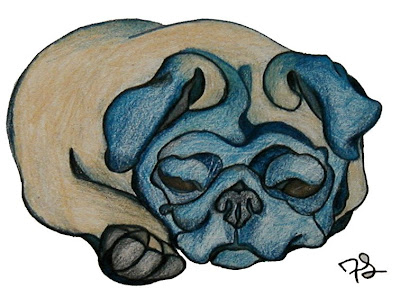 Doodle Week Day 5 gets a bit philosophical with the theme Doodle Evil. I'm not a subscriber to the black-and-white world view that sees clear external divisions between the holy and profane. Rather I perceive myriad contradictions in humanity's perpetual internal struggle to determine whether our worse or better nature wins out. When an evil act is committed, it's usually by the hand of someone who has given in to his or her baser, most selfish instincts. 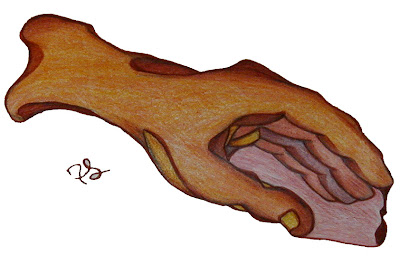 Doodle Week Day 4's theme is Doodle Vacation. With the US dollar trending downward and travel abroad becoming very expensive, many Americans are taking stay-cations. This means doing interesting things close to home. There are also the frequent journeys into the imaginative world of books and movies that are on my itinerary.

I'm currently immersed in a book about early 20th Century cartoonist George Herriman who penned the strip Krazy Kat. Herriman's comic scenery verges on the surreal and inspired the following dreamy ocean landscape, which is where you'll find me during my mental summer vacation. 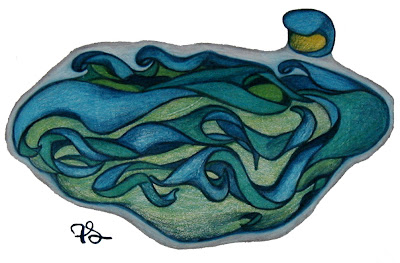 It's Doodle Week Day 3 and the theme today is Doodle Garden. This is a genetically modified, fruity vegetable hybrid. It's designed to withstand all Doodle Bug infestations. It may not taste very good, but it ships great. 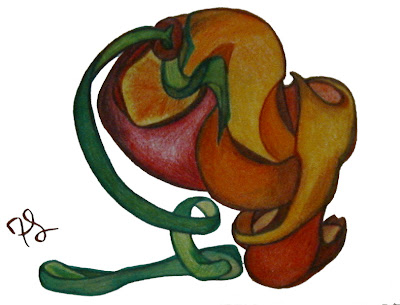 Posted by Francis Scudellari at 8:51 AM 18 comments:

The theme for Doodle Week's Day Two is Outer Space. Astronomy isn't one of my strengths, so I offer up a crude rendering of a galaxy. Be fair warned: If you stare long enough at the center, you may lapse into a trance. 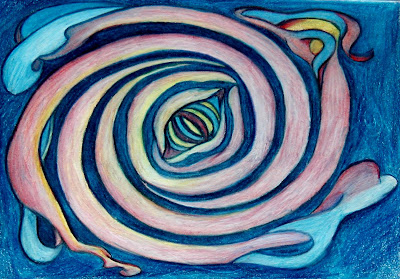 Posted by Francis Scudellari at 2:54 AM 20 comments:

Day One of Doodle Week dawns with the theme Doodle Bug buzzing around the blogosphere, and I kick start my week of contributions with everyone's favorite larva: the caterpillar. 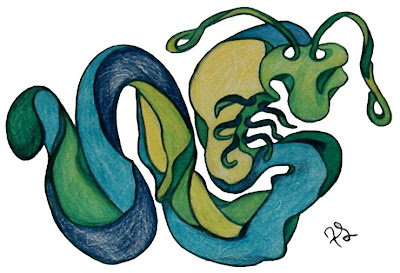 Posted by Francis Scudellari at 3:25 AM 13 comments:

As the badge in my sidebar so colorfully announces, Doodle Week II begins next Monday. That means I'll be revving up the blog with daily posts very shortly. I'll also sprinkle the latest chapters of my short story Belly into the mix, so don't let your eyeballs stray far from this space.

To get you in a properly artsy mood, here's another illustration I created for Hanna's poetry book. It's called "Virgole di lacrime" (Commas of tears). 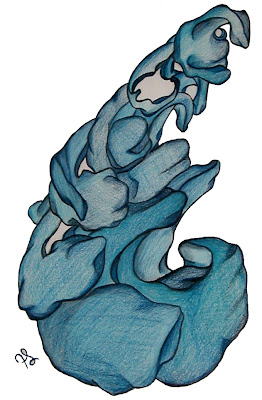 This didn't turn out quite the way I wanted, but the show must go on ... 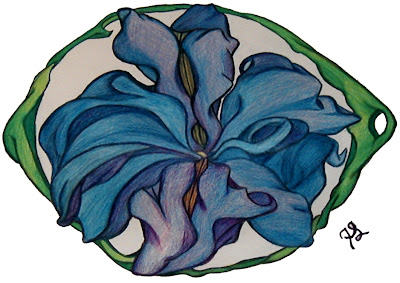 In this Iris Garden

Continuing on with my next installment of comment-inspired titles (see the original post), I've written a poem based on the phrase "In the Garden of Iris" (slightly modified to suit my rhythmic purposes). It was suggested by Angel, the amazing poet and artist behind the site Here and Now 4 Angel. I'll post a companion drawing for it later.

In this iris garden
By Francis Scudellari

In this iris garden,
An uninvited guest
Not wanting, to intrude
I risk a sidelong glance

Upward to drink air thick
With instructions of love,
Selfless do's pouring forth
From a mistress aglow

And, self-aware I tip-
Toe a trail away, leave
Faint prints, one day retraced
For more eavesdropped lessons
Posted by Francis Scudellari at 2:01 PM 9 comments: