It's a Walled World After All

There have been several stories in the news the past few weeks about walls, trenches, moats, and land mines being used to "secure" the borders of various cities and countries.

Besides the issue of whether or not these barriers actually would provided any real security, or what social programs would be sacrificed in order to fund these costly endeavors, I think it's important to understand how such methods at social control run counter to the overall trend toward connectedness.

We entered a "globalized" world with the advent of the microchip and its application to communication and transportation technologies. The world really has become a smaller place in the past decades. There are downsides to this connectedness that we've all seen examples of, especially since we're still in the transitional stages of that economic and social shift.

From invasive foreign animal and plant species impacting local ecosystems, to the threat of flu pandemics, to the outsourcing of jobs to low-wage nations, the negative effects of the changes are visible to almost everyone. And then there is the development of dispersed terrorist networks, which has lead to the reactionary impulse to wall ourselves in and keep out foreign threats.

What is interesting is that while governments push for these physical barriers to stop the flow of people across borders, they work even harder for the corporations to knock down the social and technological barriers that hinder the flow of capital across borders. As long as globalization is controled from above, and organized to benefit the super rich, it will lead to constant tension, confrontation and violent clashes. That path will lead not toward social connectedness and wider democracy, but to strict social control and fascism.

The potential benefits of a global society organized to benefit all of the world's people are great. The imagination reels at the wonderful possibilities present-day technologies create. News and knowledge can traverse the globe in the blink of an eye. Social collaboration is possible on a scale never before dreamed. Social capital can be pooled to solve the most entrenched problems. But none of this will take place until there is a majore re-organization of who controls the technologies and the governing bodies that administer them.

These stories of barriers reminded me of Octavia Butler's novel Parable of the Sower and its depiction of a decaying society in the near future where communities are forced to wall themselves off in order to try to survive in a world where government has abdicated all responsibility to its citizens. That novel may prove prophetic if society continues down its current road.

Erecting walls is a movement backwards, to the times when a Great Wall of China was needed to keep out the invading hordes. Living things don't move backwards and survive. We need to move forward, toward true connectedness that benefits everyone.

Here are some links to recent stories on the push for barriers:

Latest chapter in silly saga of border wall
A wall on the U.S.-Mexico border is meant to secure only one thing: the re-election of members of Congress.

No writing on the wall
"... After inquiring, he learned it was a graffiti repellent spray apparently developed in satellite labs in the United States. Mizrahi was shocked: is the State of Israel going to spend money spraying graffiti repellent for use in outer space on the giant concrete wall? Is the graffiti a security threat? ..."

EU wants quick military success in southern Afghanistan
" ... Vendrell said there is no way of sealing off the Afghan-Pakistani border unless Musharraf?s idea of mining the border or building a fence along it. ..."
Posted by Francis Scudellari at 12:44 PM No comments: 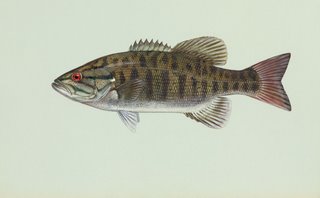 There is a story in today's Chicago Sun Times about the discovery in the Potomac river system of smallmouth bass with both sex organs. The most likely culprit for this natural oddity are manmade contaminants that have been dumped into the water. Scientists have made similar discoveries before, and the careless production and disposal of chemicals without consideration for their impact on the environment is one of our society's worst legacies. How the inundation of our water supply with these pollutants will affect the health of future generations is an unknown. The Bush administration likes to use that uncertainty to its advantage, arguing that the "science" isn't yet in on these issues, but do we really want to gamble with our children's well-being that way?

The Christian right likes to complain about the ways in which science can "play God," especially as it relates to Stem Cell Research and end-of-life decisions, but you rarely hear them question such environmental issues as these. That silence speaks volumes as to their real agenda, which is political and not moral. What could be more god-like than altering the genetic make up of animal species? The chemicals in question are often rushed to market without proper research as to possible environmental and health affects. The fact that the damage wrought is an unforseen consequence of for-profit science makes it no less criminal.

Fish that are both male and female discovered in Potomac

WASHINGTON -- Scientists say abnormal "intersex" fish, with both male and female characteristics, have been discovered in the Potomac River and its tributaries across the Capitol Region, raising questions about how contaminants are affecting millions of people who drink tap water there.

"I don't know, and I don't think anybody knows, the answer to that question right now: Is the effect in the fish transferable to humans?" said Thomas Jacobus, general manager of the Washington Aqueduct, which filters river water for residents to drink in the District of Columbia, Arlington, Va., and Falls Church, Va. ...

In the past 10 years, pollutants mimicking hormones have raised alarms around the world as alligators, frogs, polar bears and other animals have developed abnormalities.

Scientists have identified a large number of pollutants that could be to blame -- including human estrogen from processed sewage, animal estrogen from farm manure, certain pesticides and soap additives.

Here's another related article I found on the Web:

It's Not Easy Being Green: Are weed-killers turning frogs into hermaphrodites?
by William Souder, Harpers

And that article brought to mind a book by Tom Robbins -- Half Asleep in Frog Pyjamas -- in which one of the motifs is the dissapearance of the Earth's frogs. Here's an interesting quote from that book that I think speaks well to the issue at hand: