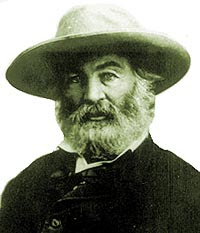 Today I raise my virtual glass once more to the great American poet Walt Whitman, who was born on this date in 1819. He is probably best known as the author of the collection Leaves of Grass, which was written during one of the most turbulent and tranformative times in our nation's history.

He was a gay man from 19th Century New York who wrote very personal poems that spoke openly about his life and sexuality, but he also found common cause with all humanity no matter their age, sex, orientation, occupation or social standing. He sang the praises of the downtrodden and extolled the true democratic ideals at the heart of our national identity. He saw beauty in all of Nature's creation, including his fellow man, and he revelled in its vitality.

Below are a few select poems that I find particularly inspiring. You can read the full text of Leaves of Grass online at Bartleby.com

The first poem is a good example of Whitman's appreciation of Nature, the human body and sexuality. It's a poem that revels in the experience of being alive, here and now.

To the Garden the World

TO the garden, the world, anew ascending,
Potent mates, daughters, sons, preluding,
The love, the life of their bodies, meaning and being,
Curious, here behold my resurrection, after slumber;
The revolving cycles, in their wide sweep, have brought me again,
Amorous, mature—all beautiful to me—all wondrous;
My limbs, and the quivering fire that ever plays through them, for reasons, most wondrous;
Existing, I peer and penetrate still,
Content with the present—content with the past,
By my side, or back of me, Eve following,
Or in front, and I following her just the same.

The second poem celebrates this country's greatest assets: its people and the work they do. It finds beauty in the everyday, and song in the rhythms that most hear as the white noise of city life. It's a vision of democracy that recognizes the contributions made by those whose names are usually forgotten in the annals of history.

I HEAR America singing, the varied carols I hear;
Those of mechanics—each one singing his, as it should be, blithe and strong;
The carpenter singing his, as he measures his plank or beam,
The mason singing his, as he makes ready for work, or leaves off work;
The boatman singing what belongs to him in his boat—the deckhand singing on the steamboat deck;
The shoemaker singing as he sits on his bench—the hatter singing as he stands;
The wood-cutter’s song—the ploughboy’s, on his way in the morning, or at the noon intermission, or at sundown;
The delicious singing of the mother—or of the young wife at work—or of the girl sewing or washing—Each singing what belongs to her, and to none else;
The day what belongs to the day—At night, the party of young fellows, robust, friendly,
Singing, with open mouths, their strong melodious songs.

This last poem speaks to Whitman's legacy. Here and elsewhere he addresses we future generations, and he recognizes that the greatest gifts he can give us are his "songs." Not only will he pass on "souvenirs of democracy" to we the readers of his tomorrow, but the truest representation of himself. It's through these written words that we truly can feel the purest pulse of his being.

THE business man, the acquirer vast,
After assiduous years, surveying results, preparing for departure,
Devises houses and lands to his children—bequeaths stocks, goods—funds for a school or hospital,
Leaves money to certain companions to buy tokens, souvenirs of gems and gold;
Parceling out with care—And then, to prevent all cavil,
His name to his testament formally signs.

But I, my life surveying,
With nothing to show, to devise, from its idle years,
Nor houses, nor lands—nor tokens of gems or gold for my friends,
Only these Souvenirs of Democracy—In them—in all my songs—behind me leaving,
To You, who ever you are, (bathing, leavening this leaf especially with my breath—pressing on it a moment with my own hands;
—Here! feel how the pulse beats in my wrists!—how my heart’s-blood is swelling, contracting!)
I will You, in all, Myself, with promise to never desert you,
To which I sign my name.

Posted by Francis Scudellari at 6:14 PM