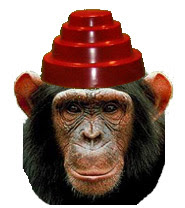 The May Wired has some revealing stats on American popular acceptance of evolutionary theory. For example, only 40% of Americans believe that humans evolved from earlier species. That puts the US behind 28 other countries in embracing evolution. We've seen the numbers before, but it's still pretty scary.

After 6 years of a President who puts "beliefs" ahead of facts, appeals to God to solve thorny policy problems, and openly consorts with extreme Christian fundamentalists, is it any wonder that the country has turned its collective back on scientific thought?
Part of it may be attributable to a public backlash against intellectualism. The Right Wing has carried out a very successful propaganda campaign to convince Americans to follow their guts rather than their brains. It's an act that Stephen Colbert's faux punditry pretty accurately lampoons, and when you're misleading folks for gain you certainly don't want them using their heads to question what's going on in the world.
Americans needs to wake up and realize that it's the religious right who want to make a monkey out of them. If they don't, they might just find themselves becoming the thing they most feared: a benighted theocracy.
Posted by Francis Scudellari at 9:04 PM