Occidental Petroleum: "A Legacy of Harm" 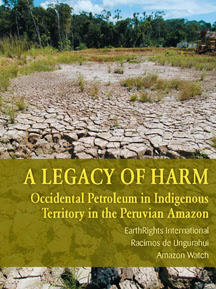 A few days ago, my friend Nancy Backas forwarded to me a press release from Earth Rights International that details a lawsuit brought against Occidental Petroleum for the environmental abuses they've perpetrated in the Peruvian Amazon. It's not an uncommon story of US Corporate greed wreaking havoc on the indigenous populations and ecologies of foreign lands, but unfortunately it's also not the type of story that gets much mainstream press coverage.

Granted I don't have the readership of the New York Times (or the Podunk Times, for that matter), but I'm doing my part to spread the word. Below are excerpts from the press release, and a link to the full text. You can also check out the full Legacy of Harm report in PDF format (cover at left).

May 10, 2007, Los Angeles, CA – EarthRights International (ERI) and the law firm Schonbrun DeSimone Seplow Harris & Hoffman LLP (SDSHH) today brought suit on behalf of twenty-five indigenous Achuar plaintiffs from the Peruvian Amazon against Los Angeles-based Occidental Petroleum Corp. (Oxy), alleging egregious harm caused by Oxy over a thirty-year period in the Corrientes River basin during which Oxy contaminated the rivers and lands of the indigenous Achuar communities, causing death, widespread poisoning and destruction of their way of life. ERI and SDSHH are joined as counsel by attorneys Bob Kerrigan of Pensacola, Florida, and Natalie Bridgeman of San Francisco.

Apu Tomás Maynas Carijano, a plaintiff in the case and an Achuar traditional leader, stated, “With this lawsuit, I am here demanding Oxy clean up and compensate for the contamination it left in the Río Corrientes region. We can no longer eat the fish or drink the water. Our children are guaranteed death unless Oxy acts now.”

The legal action follows last week’s release of A Legacy of Harm, an in-depth report by ERI, the advocacy organization Amazon Watch, and the Peruvian NGO Racimos de Ungurahui that reveals that Oxy deliberately ignored industry standards and employed out-of-date practices for 30 years, resulting in severe cadmium and lead poisoning among the Achuar communities. The report also finds that Oxy dumped an average of 850,000 barrels per day of toxic oil by-products directly into rivers and streams used by the Achuar for drinking, bathing, washing, and fishing – totaling approximately nine billion barrels during the 30 years of operation.

Posted by Francis Scudellari at 12:51 AM