Finding my way through the "Labyrinth" 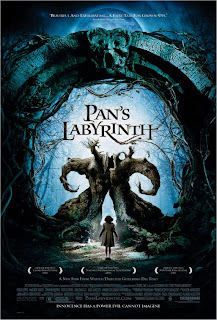 I watched Guillermo del Toro's film "Pan's Labyrinth" on DVD yesterday (yet another flick I meant to see in the theater but never did ...), and my high expectations weren't disappointed. Like its subject matter, the realm of fables, the story is simple on the surface but filled with symbols and hidden meanings. (The IMDB listing for El Laberinto del Fauno has a full list of credits and some trivia).

In short, it's a story of a young girl's attempt to come to terms with the brutality of the world that surrounds her. Ofelia is forced to live at a mill that serves as the base of operations for the fascist army that is trying to wipe out the last vestiges of the resistance following the defeat of the Republic in the Spanish Civil War. Her mother Carmen has married Captain Vidal who ruthlessly pursues that mission. It is in the world of fable and story that she finds refuge from the reality that threatens the lives of those she cares about.

The action of the movie shifts seamlessly between the "real" world and that of Ofelia's imagination. The labyrinth that sits on the grounds of the mill acts as a metaphor for the journey that Ofelia, and all of us, must take in life and it's at the center of that maze that the story begins and ends.

The film juxtaposes order and chaos, the mechanical and Nature, ideology and humanity, brutality and compassion, fate and free will. The two most prominent figures on each side of the equation are the Captain and the Faun (or Pan).

When we first meet the Captain, he is staring at his watch and the ticking timepiece is a recurring theme of the character throughout the film. He is obsessed with demanding a child-like blind obedience from everyone he commands. His is a world that is tightly regulated with an emphasis on punctuality, decorum, and "cleanliness." He believes everyone is fated to a particular position in life and he is the enforcer of that order.

Pan is a mythic figure whose identity can be traced back to the ancient Greeks. Half goat and half man, he's symbolic of fertility, chaos and the duality of beauty and menace in Nature. He is from the realm of magic and fairy tales that Ofelia is trying to hold onto in the midst of a world that's trying to force adulthood upon her. Her mother, who bears the Captain's child and is battling to survive the pregnancy, keeps reminding Ofelia of the compromises she'll need to make as a woman, speaking from her own bitter experience. It's such harsh reminders of her reality that push Ofelia further into the realm of the imagination and the hope it offers.

The entrance to the Labyrinth is inscribed with the latin phrase "In consiliis nostris, fatum nostrum est" that roughly translates to "our choices determine our fate," and it's the battle against fate and blind obedience that defines Ofelia's struggles, and those of the other characters in the film. Ofelia refuses to accept Vidal as her father. The resistance fighters press on against certain defeat. Doctor Ferreiro chooses death over allegiance to the Captain. It's an existentialist take on the world, that defines us by our moral choices in the face of seemingly inevitable defeat.

The story is Ofelia's remembrance of the events, and it's therefore the fable she's constructed to make sense of her life. When she first meets Pan, Ofelia is given the "Book of Crossroads" that appears blank but gradually reveals the 3 tasks she must accomplish to prove she is Princess Moanna and win re-entry into an underworld realm where there is no pain or lies. Along the way she must follow certain rules but the path isn't rigid and the final test requires that she refuse Pan's demands for blind obedience.

The story is filled with references and symbols from existing myths and fairy tales. When Ofelia first enters the portal at the heart of the labyrinth she repeats the word "Echo," which is a typical thing for a child to do in a chamber but also recalls the story of Pan's pursuit of the nymph of that name. Other images recall Alice's Adventures in Wonderland and the story of Abraham and Isaac. The director has a background in horror films, and the fairy tales here definitely recall the dark mood of those by the Brothers Grimm, but the most gory scenes are those perpetrated by the Captain as he beats and tortures those he suspects of aiding the resistance.

The phrase "don't be afraid" is repeated by several characters throughout the film, and as brutal and cruel as the world of the film is, it's definitely worth making the journey through the labyrinth.
Posted by Francis Scudellari at 1:56 PM

I didn't read this post because I just rented the movie... I have heard great things about it.

Ok, I saw it. It was fantastic and it was nice reading your review because there was plenty I missed.

I'm glad my review was helpful. I actually watched the DVD twice because I knew there were things I missed in the first viewing. I also read some of del Toro's comments on the film, which helped.