Ruled by a god of war, US has ways to go for peace 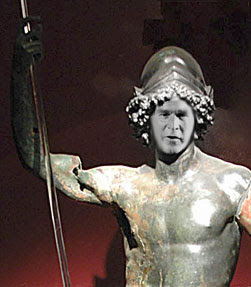 As has been widely reported today, and I'm sure just as widely blogged about, the US was ranked a pretty shabby 96th (out of 121 countries) on the new Global Peace Index. The index scores were tabulated based on 24 factors that include: domestic access to guns; defense spending; human rights record; government corruption; and involvement in wars.

There will be a lot of debate about the methodology, especially on the right-wing, and even the authors try to defray that by mentioning as an excuse the US role as "one of the world's military-diplomatic powers." Even that characterization, however, might anger the conservative hyper-nationalists who like to see us as "the sole super power."

What's indisputable, at least in my eyes, is that the depth of our lowly status can be directly attributable to the policies of George W Bush and his neo-con consorts. In addition to an adventurist, militaristic foreign policy that's led us into wars both overt and covert, W has pursued a domestic agenda that's drastically cut social spending (in deference to cold-war era levels of defense spending) and exacerbated the root causes of violence in our streets. Not that we were very good at peace before Bush II. We've led the world in arms exports for quite some time.

As for the best at peace: Norway, Denmark, New Zealand, Ireland, and Japan comprise the top 5 nations. Iraq, as you might have guessed, gets the dubious distinction of placing last.

Here's a quick glimpse of the other countries in our general index neighborhood:

That's not really the best crowd to be hanging out with, but they might say the same of us.

Read the full press release, with the complete list of ranked countries.

I brainstormed an appropriate image for this post, and settled on a classic statue of the Greek god Ares (with a little likeness of George W tweaked in). In reading up on Ares at Answers.com, I discovered he does indeed have a lot in common with our dear leader.

Here's the definition attributed to the World Mythology Dictionary (emphasis added by me, if you hadn't guessed):

The Greek war god, the son of Zeus and Hera. An unpopular deity, Ares received serious worship only in central and northern Greece. In mythology he appears as an instigator of violence, a tempestuous lover, or an unscrupulous friend. Without any moral attributes, Ares can be bloody, merciless, fearful, and cowardly, in striking contrast to the Roman Mars.

Posted by Francis Scudellari at 11:34 PM