Peering into the universe, searching for a mate 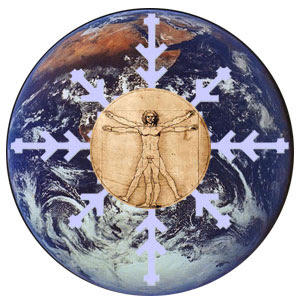 Astonomers announced today the discovery of 28 new planets outside our solar system. None among the large number of previously unobserved heavenly bodies are comparable to our home orbiting rock. That will disappoint some who peer up into the sky in the hope of finding another world like ours, one that could nurture life — our own, or others'.

Maybe that pursuit is driven by loneliness, or the desire to understand how we ended up here, or an inkling that we're running out of time on Earth and have to seek out other homes. Whatever the motivation, it's a search that will need to go on a lot longer, and chances are we may never find another Earth — so we should do our best to preserve the one we have.

Here is an excerpt from the Los Angeles Times coverage of the story:

Array of new planets found, but none like ours
By John Johnson Jr

HONOLULU — An international team of astronomers on Monday announced the discovery of 28 planets outside the solar system, the greatest single haul since the first so-called exoplanet was found 12 years ago.

Still eluding the planet hunters, however, is the much-longed-for Earth replica, a planet like ours that could nourish some kind of life, allowing humans to feel a little less lonely in the cosmos.

What's the likelihood of finding another Earth in the infinity of the universe? Mathematically it's possible, just as theoretically Nature could produce identical snowflakes. In each case, the existence of a matched mate remains a mere abstraction.

Pursuing my world as snowflake conceit inevitably led me to ask the question: Exactly why is each snowflake different? Truth be told, scientists don't fully know. Digging into the archives of Wired magazine, I found the following partial explanation in the 2001 article "What Makes a Snowflake Unique?":

By growing snow crystals in the laboratory under controlled conditions, the research team discovered that they develop differently depending on the temperature and how wet the air is.

A typical snowflake begins by forming around a speck of dust. From this unassuming beginning it grows into a tiny hexagonal prism, just a few microns in size. The initial symmetry of the snowflake results from the intrinsic molecular structure of ice.

As the crystal grows, it's often blown about in the sky. The air and temperature around the crystal are constantly changing. Snowflakes are extremely sensitive; even a small change in these conditions can lead to different growth patterns.

The final shape of the crystal reflects these growth conditions. The longer the snowflake is blown about in the skies, the more complex the resulting snow crystal.

"No two crystals have the same history so they don't grow in the same way," said Libbrecht.

And, he added, no two have ever been the same, or ever will be.

We're told as kids that like snowflakes, no two humans are supposed to be alike. The description of how the vagaries of temperature and the changing winds shape ice crystals is certainly a lovely little metaphor for the evolution of our own appearance, personalities and consciousness. I think that comparison may extend to our world as a whole — through a special combination of circumstances life arose here and the Earth as we know it took shape. Can those conditions be reproduced in the vast reaches of space? The search goes on ...

Here's one more metaphor: Mathemeticians say that an infinite number of monkeys banging on keyboards over an infinite amount of time will produce the complete works of William Shakespeare. That may be true in theory, but I already have a serviceable volume of all the bard's plays. It'll be much easier for me to preserve the one I have, than wait millennia for those abstract monkeys to get me another. But that doesn't mean the little apes should stop typing, or the dreamers stop hoping.
Posted by Francis Scudellari at 6:56 PM

This is incredible. What a fascinating find. Can you imagine another earth? The possibilities are endless.

It's fun to try to imagine another Earth. As long as it's not one of those silly Star Trek type of alternate realities -- look alike versions with beards and bad tempers. Wait, I have a beard ... maybe I'm the evil twin.

Now that is funny!