The Illusionist: Challenging the reality of your world 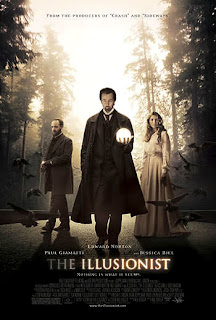 Continuing my movie-reviewing frenzy, today I tackle Neil Burger's The Illusionist (see the IMDB entry for the movie's particulars). Although the faux accents detracted slightly from the experience for me, it's a very well crafted film and fun to watch.

The action takes place in 1900 Austria and follows Eisenheim the Illusionist (Edward Norton) as he tries to rekindle a star-crossed relationship with the love of his life Sophie (Jessica Biel). Their teenage romance foundered because of conflicting social classes. Banned by her parents from seeing each other, Eisenheim, the son of a cabinet maker, escaped to the East to learn the art of illusion. Sophie, a countess, stayed in Vienna to become engaged to the would-be Emperor, Crown Prince Leopold (Rufus Sewell).

Returning to Vienna after ten years, Eisenheim uses his craft to alter perceptions of his audiences — from poor street kids, to bourgeois theater goers, to the royal court. His abilities prove a direct threat to the mercurial monarch and Eisenheim is dogged by Inspector Uhl's (Paul Giamatti) repeated attempts to shut down and debunk his act.

The themes of the film aren't especially profound, but I always enjoy trying to put what I watch into the political context of our time. I could probably construct an elaborate explanation of how the film is a metaphor for our freedom challenged, post 9/11 life under George W, a pseudo self-perceived emperor. That, however, would be an academic exercise not worth the effort. (I would really like someone to address the renewed popularity of horror flicks and what that says about the brutal tenor of our times. It won't be me, because I can't stand watching those films.)

I do think, however, that artists are a product of their environments, and the works they create can be indicative of social currents, whether or not such ideas figure prominently in their plans. The basic subject of the Illusionist is the nature of reality, and it probes the use of illusion (a stand in for art of all kinds, including film) to alter perceptions and undermine otherwise seemingly unchallenged authority.

It is the capacity of artists to open up the imaginations of their audience to new possibilities that has always made them a target of government censorship and persecution, especially in times of strict social control. That's exactly what Eisenheim does in the film, exposing and exploiting the Prince's vulnerabilities. It's why art is always at the vanguard of social revolution, and it's why I enjoy writing about it so much.
Posted by Francis Scudellari at 7:27 PM