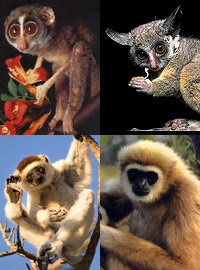 I'm up to Episode 8 of the BBC documentary series Life of Mammals (LoM) and it's making its inevitable march toward describing those animals dearest to our hearts: humans. The progression means first going up into the trees with the primates, before descending back down to the terra firma of grasslands as our ancestors once did, at least according to the history that we happy US few who believe in evolution accept (more on that later).

"Life in the Trees" focuses on the myriad of monkeys and other mammals who have made a living feeding on the bounty of the forest canopy. What drove mammals of various kinds up into the trees? There is safety from predators in the branches, but there's also an extraodinary variety of food and it is that search for sustenance that models behavior and creates the impetus for physical adaptation.

The episode features non-primates of various kinds that have evolved traits to help them clamber up and down trees, or better yet jump and fly between them. From the rubbery pads of a Hyrax balancing on twigs in Kenya, to the strong forearms and sharp claws of a Sun Bear clasping trunks, getting up in the air to snack on fruits and leaves was the easier task. There are the more drastic modification of a skin membrane that helps a Flying Squirrel glide and a Fruit Bat fly between branches, and this overcomes the need to retreat back down so that life can be led exclusively above ground.

As for the primates, the show gives us excellent examples of tree huggers who use grasping thumbed hands and big-toed feet to move around the forests with amazing ease. Infra-red shots are used to capture the movements of two nocturnal animals: the Slender Loris of India and its African relative the Bush Baby. The Loris uses slow movements to sneak up on its prey in silence, and has the peculiar trait of urinating on its hands as it moves along. The Bush Baby uses the speed of incredible leaps to catch its targets unaware. Both have large forward pointing eyes to help judge distances.

The island of Madagascar, as some might know from the animated kids movie of the same name, is the home to an array of Lemurs. LoM focuses on the Sifaka and the way it moves about from tree to tree, pushing off from one trunk with its powerful back legs and then twisting its body in mid-air to get in position to land. More amusing is the way the Sifaka runs when it needs to travel on the ground. Unable to get the same push off as from a tree, it takes small hops with its hands in the air.

Finally LoM shows us Gibbons, which are the fastest flightless animal in the canopy. These small apes of Asia quickly swing from branch to branch aided by long arms and a ball joint in their wrists. Their effortless maneuvering reminded me of Spiderman's high-speed web-swinging in the movies. They might make good stunt doubles, or models for CGI.

I'll post about Episode 9 tomorrow, and there is a primacy of monkey business to come.
Posted by Francis Scudellari at 5:44 PM