Favorite Song of the Day: God Save the Queen 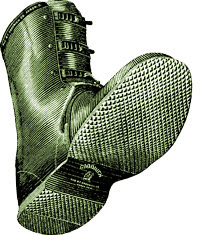 You've probably seen the stories that the Queen of England visited with the head of the former colonies today (see Bush and Queen Celebrate Common Values from the New York Times, as one example). I guess most of the press is either too dim-witted or too steeped in the cult of celebrity to recognize the irony of an American President kowtowing to an English Royal. Then again, GW thinks he's above the law and has a divine right to rule so he's much closer to the old British monarchs than the people he's supposed to represent.

I for one like to honor the memory of our forefathers who gave the boot to monarchy and the tyranny it wrought around the world. There's no better way to do that than to dust off this oldie from those 70s bad-boy Brits, the Sex Pistols. Let's try to keep in mind what a parasitic little clan these Windsors actually are and give them a fittingly irreverent welcome.

God Save the Queen by Sex Pistols

Posted by Francis Scudellari at 11:13 PM