Accounting for Katrina: Details on our government's failings 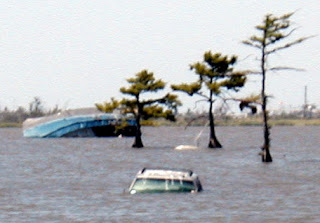 There is an article in the Sunday Washington Post that details the bureaucratic bungling and mismanagement that lead to the waste and refusal of foreign aid in the aftermath of Katrina.

It's a story that has particular resonance in the wake of my trip to the area in April, and it echoes the personal stories I heard from residents there about the slow trickle of relief funds making it into the area.

Based on 10,000 documents obtained via Freedom of Information Act requests issued by a watchdog group called Citizens for Responsibility and Ethics in Washington, the piece does a good job of describing the lost opportunities to distribute both cash and in-kind donations generously offered by our allies. That said, I can't help but wonder if there's even more to the story.

Did the administration's links to the petroleum industry impact its willingness to accept $400 million dollars worth of fuel from Kuwait? Would such an influx of free petroleum have hurt the oil companies' bottom lines by forcing the price of fuel down? Did the years of privatizing and gutting the federal government of its responsibilities for social welfare impact its ability to manage relief efforts? Did the government hinder the relief efforts intentionally to further some hidden agenda, or was it a simple case of incompetence?

I can't answer these questions, but I think they're all worth pursuing and they're definitely floating around down in the afflicted areas. Here are excerpts from the article:

As the winds and water of Hurricane Katrina were receding, presidential confidante Karen Hughes sent a cable from her State Department office to U.S. ambassadors worldwide.

Titled "Echo-Chamber Message" -- a public relations term for talking points designed to be repeated again and again -- the Sept. 7, 2005, directive was unmistakable: Assure the scores of countries that had pledged or donated aid at the height of the disaster that their largesse had provided Americans "practical help and moral support" and "highlight the concrete benefits hurricane victims are receiving."

Many of the U.S. diplomats who received the message, however, were beginning to
witness a more embarrassing reality. They knew the U.S. government was turning
down many allies' offers of manpower, supplies and expertise worth untold millions of dollars. Eventually the United States also would fail to collect most of the unprecedented outpouring of international cash assistance for Katrina's victims.

Allies offered $854 million in cash and in oil that was to be sold for cash. But only $40 million has been used so far for disaster victims or reconstruction, according to U.S. officials and contractors. Most of the aid went uncollected, including $400 million worth of oil. Some offers were withdrawn or redirected to private groups such as the Red Cross. The rest has been delayed by red tape and bureaucratic limits on how it can be spent.

In addition, valuable supplies and services -- such as cellphone systems, medicine and cruise ships -- were delayed or declined because the government could not handle them. In some cases, supplies were wasted.

Posted by Francis Scudellari at 2:56 PM