Ridley Scott's Blade Runner: Death of an android, birth of a man 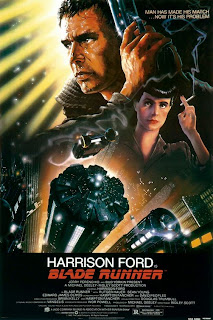 Today is film director Ridley Scott's 70th birthday, and to commemorate the occasion I'm sharing my favorite scene from the work to which he'll always be most closely linked in my mind. Blade Runner, Scott's adaptation of Philip K Dick's Do Androids Dream of Electric Sheep?, was released 25 years ago and has stood the test of time as one of the most visually artful examples of science fiction movie making.

Scott has directed some other pretty popular theatrics, including the recent blockbuster American Gangster and the 2000 Best Picture Academy Award Winner Gladiator, but none have left as strong an impression on me as this futuristic film noir about a detective investigating what it means to be human. It's a question that will take on increasing relevance with each inevitable advance in the sciences of Robotics and Artificial Intelligence.

There are many amazing images to recollect from the moody movie, but I've always found most compelling the climactic shot. A shocked Deckard, beaten down from his chase after a rampaging replicant, is a captive audience to the twist ending of a sentimental Roy Batty's dying words. The dove symbolism might be a bit too obvious, but the thoughts capture the romantic soul of a storyteller wishing to share the beauty of personal experience, and it frames well the dubious morality of Deckard's own quest.

The film is a dark imagining of a future dominated by technology; where those seeking freedom and humanity are deemed both threatening and criminal. It casts a surprisingly philosophical focus on the moral choices we make when faced with our own mortality. Humans and androids of the world unite, you have nothing to lose but your virtual chains.

Posted by Francis Scudellari at 7:28 PM

One of my all time favorites, next to Apocalypse Now. Well done on the review Francis. I think I'll go and buy the DVD now.
~JD

Hey JD,
Hold off on that purchase, as I think I read that there may be yet another new version coming out as Scott still wasn't completely happy with the last "director's cut". I can't criticize him, I've been tweaking the post the past 30 minutes, so you may want to make sure you've actually seen my final version too :).