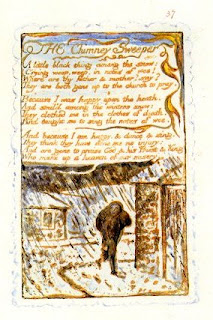 Completing the second half of my November 28th birthday tributes, I honor the life and work of William Blake, the poet and visual artist who was born a numerically significant quarter-millennium ago on this date.

William Blake was a man of many seeming contrasts, and as such an inspiration for fulfilling my own contradictory impulses. He created works of deep spirituality, but he also concerned himself with the very material people and events of his time and place. He bristled at organized religion, but was also a mystic who had visions of angels and the ghosts of Old Testament prophets. He was considered mad in his own time, but won countless admirers among the creative generations who followed in his footsteps.

Although he was a devotee of the metaphysical and an inventor of his own mythologies, Blake also delved into the political and social issues of his day. He wrote in praise of the American and French revolutions, and he documented the human abuses that took place in the early English Industrial Age.

The weak and innocent didn't fare well in the brutish early period of Industry's growth. The mistreatment of the young boys who were conscripted to sweep the soot from London's flues and chimneys was certainly one glaring example of that. In two companion pieces from the volumes Songs of Innocence and Songs of Experience, Blake lamented the sad fate of these young men who were sold into the dark service by their impoverished parents.

I've included the Experience poem below (an image of Blake's original artwork and verse appears above). You can click here to read the full text of the other, more innocent "Chimney Sweeper." The two pieces provide a good taste of the dualities in Blake's creation.

Songs of Experience: The Chimney Sweeper

A little black thing among the snow,
Crying "'weep! 'weep!" in notes of woe!
"Where are thy father and mother, say?"
"They are both gone up to the church to pray.

"Because I was happy upon the heath,
And smiled among the winter’s snow,
They clothed me in the clothes of death,
And taught me to sing the notes of woe.

"And because I am happy and dance and sing,
They think they have done me no injury,
And are gone to praise God and his Priest and King,
Who make up a heaven of our misery."