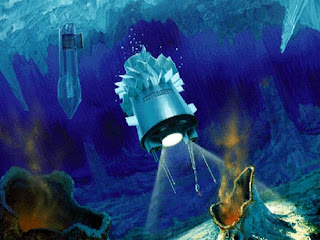 The desire to make connections is both a weakness and a strength of human intelligence. Unregulated, we can start to set up full philosophical systems of cause and effect that are based on coincidental occurrences; but reined in, our sometimes bold propensity for open-eyed dreaming can also lead to unexpected insights and breakthroughs toward new technologies.

It takes time and continued experimentation to separate superstition from science, and even then residual bits of either side of the duality may persist yin-yang like: enough science to lend a religion the plausibility to catch fire in the popular imagination, or enough superstition to propel theories down varied and unexpected paths.

My mind is probably more prone to false connections than most, but I'm a writer rather than a scientist, and art obeys a different, although sometimes intertwined, imperative. This is all a round-about preface to a discussion of the concept of an approaching technological singularity.

If you've seen science-fiction films such as The Terminator or The Matrix, or read books such as Neuromancer by William Gibson, you'll be familiar with the general idea. At the point that science develops an artificial intelligence that surpasses the capabilities of our own, the AI will be able to devise its own continually improving, thinking machines and we humans will become inconsequential to its further evolution.

Risking the label of blasphemer, in a sense it will be as if humanity gave birth to god; the creation of an entity that infinitely surpasses the limits of our own creative imagination. It's a literally awesome prospect, and one that re-awakens the mythical dread of our overstepping a dangerous threshold.

What will happen after this moment of planned human obsolescence is less clear. If you buy into the generally dystopic view of some futurists, then the birthed ultraintelligent machines may deem humanity a glorified virus that needs to be eradicated in order to safeguard progress. Other more optimistic soothsayers predict a rapid explosion of breakthroughs and a Utopian world where our most intractable problems are solved.

If we continue to build intelligent machines purposed for hate and destruction, the odds will favor the doomed side of that scenario. The military has been running advertisements lately that boast about its cutting-edge drones. The propaganda is spotted in TV sports breaks and tacked on to the beginning of films (I was forced to witness a Grindhouse style retro ad for the Navy's drones before American Gangster last night).

The military may try to convince us the UAV (unmanned aerial vehicle) technology has a noble side of safeguarding troops, but the true intentions to spy and kill are transparently clear. As we continue to program machines with a core purpose to destroy human life, it's hard to imagine that Isaac Asimov's Three Laws of Robotics will protect us from harm if the singularity does occur.

All inventions bear the stamped image of their creators. Where technology takes us will depend on the motivations behind its devising. I'd feel much more confident about our future if we could focus more on inventing systems meant to eradicate pollution, poverty, hunger and disease ... not each other.

Author Vernor Vinge wrote the essay "The Coming Technological Singularity" in 1993 and predicted the end of the human era some time between the years 2005 and 2030. Coincidentally the Dec. 21, 2012 end date of the Mayan Calendar falls neatly within that year range, but that may just be one more false connection. I hope by then we can figure out how to program machines capable of love and sympathy.

Note: Image is an artist's concept of the cryobot and hydrobot from NASA.
Posted by Francis Scudellari at 10:34 PM

Behind ever invention there is a human, herein lays the problem for as you said, “All inventions bear the stamped image of their creators.” Unfortunately; even with any novelty for the betterment of Society as whole, rather fashioned from the latest advanced modern technology or not, there will always be some humans who will find a way to use such for the lesser good or for their own selfish means.

Technology. Tools. Inventions. All with the proposed function of making life easier. Translation: empowered laziness. Does it really truly benefit us that we are now required to perform next to zero manual labor if we so choose?

I see your point completely, and it is a warning that should be heeded. But I am afraid that we will kill ourselves long before the machines get us. If not, by that time we wont even be healthy enough to serve as viable energy sources for them (re: Matrix).

Hi Jeane,
Yes, I don't know how you remove selfishness from the equation, especially in a society that preaches it as the only motivator for human action. In some sense, I think there would have to be some type of accountability to and oversight by a social entity ... not sure what such a body would look like.

Hi Dave,
With the state of the environment it's easy to feel the gloom and doom of self-extermination. But I have faith enough people will wake up to change course. We just need a little more forethought and less distraction :).

The connections are there, they are just far more complex and nonlinear than anyone imagined. Complexity sciences is showing us a world artists are not surprised to see.

Hi Dr. T,
Thanks for the contribution. I agree completely. I need to dig into the subject a lot more to get at those complexities. I just took a quick look at your in-progress dissertation, and I'll be back to read it in more depth.

Well, since I now know I have a reader of my dissertation, I'll make sure to keep posting on it. I've been getting lazy about it of late.

I've always found that the minute I start wondering if the regular posts are worth it, some one leaves a comment about how much the like them. Definitely keep posting. You'll be surprised at the people who happen upon it and appreciate that its there.

I am contacting you because I am working with the authors of a book about blogs, and I'd like to request permission to use a photograph of yours in this book. Please contact me at hannah@wefeelfine.org, and I'd be happy to give you more information about the project. Please paste a link to your blog in the subject field. Your assistance is greatly appreciated.