Umberto D: Toward a social imagination 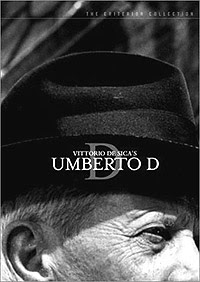 Continuing to test the accuracy of the recommendation algorithms over at NetFlix, I watched Italian film great Vittorio De Sica's Umberto D. It's a classic example of the director's Neorealist style, with its reliance on first time actors (Professor Carlo Battisti in the title role and 15-year-old Maria-Pia Casilio as his maid) and its dedication to portraying a gritty truth.

The story, on its most basic level, follows the pensioner Umberto Domenico Ferrari as he tries to figure out a way to pay his back rent and avoid the threat of eviction posed by his callous landlady. It's an indictment of that society's treatment of its elderly, a problem we're still grappling with as Western demographics take on darker shades of gray, but there's also a more universal criticism of an individualist outlook.

The director described his own film, which he dedicated to the memory of his father, as portraying the breakdown of communication that was occurring in Post-WWII Italy. It starts out in promising fashion with Umberto chanting for an increased pension amid a throng of fellow retirees marching on government offices. The protest devolves into a chaotic retreat when Italian soldiers run off the pensioners because they lack a permit, and Umberto is forced to find his own way, accompanied only by his always faithful dog Flike (who will steal the hearts of all the animal lovers out there).

From there we follow Umberto as he vainly tries to raise the money to stay in his home. Too proud to beg, the old man approaches former friends and co-workers seeking their understanding and a helping hand, but never charity. Each encounter ends in a failure to connect, as the men rush off to their private lives.

Maria, the maid, offers him what help she can, but, pregnant and unmarried, her own position in the house is tenuous. Forced to sell what little he has and even consider the imponderable possibility of giving away Flike, Umberto sinks into a deeper despair. Without spoiling the ending, I can say that De Sica doesn't offer us the type of tidy resolution we find in most Hollywood fare.

It's a very moving depiction of one man's battle against the pervasive selfishness that becomes contagion in a difficult economy; especially within a society that promotes individualistic pursuits over a sense of community even in the best of times. Umberto D, the movie and the pensioner, confronts a poverty of good will as well as that of material want. De Sica holds up a stark mirror to his time (and ours), and the harsh reflection met with some resistance among his contemporary Italians.

The moral and spiritual malaise that De Sica's film depicts arises in large part from the lack of a social imagination. The egocentric inclination of modern society often inhibits our ability to find common cause with the plight of our neighbors. Overly concerned with our own well-being, tricked into believing that prosperity is perpetual, we lack the empathy required to imagine ourselves in the same place as those experiencing more difficult circumstances.

As the cycles of life and the economy play out, we'll need to cultivate that capacity or we'll find ourselves wishing we'd paid closer attention to that most golden of rules: treat others with the same respect and generosity that you would expect from them.
Posted by Francis Scudellari at 1:11 AM

Hi Francis,
What a fascinating review. As I'm currently struggling with my grandmother's illness it hits at the heart of the plight of many elderly and isolated people... but reading between the lines I might need to put off watching this film until I'm emotionally more robust! :) Especially if there is a cute dog in it - I'll be sobbing before the opening titles!
Thanks for the recommendation,
S.

Great Francis. Your writing is truly excellent. I'll have to get a copy of Sica's film to watch. Once again another item to add to my to do list. Thanks.

On another note:
Thank you for your very kind words of encouragement on my last post. They do help, more than you realize.
~JD

Hi Simone,
Thanks for stopping by. There are some sad moments, but it's not a completely dark film. The dog is wonderful, and he's one of the bright spots in Umberto's life. I'm sorry to hear about your grandmother, and I hope things work out as best they can.

Hi JD,
I'm good at giving people things to do :). I'm glad my words helped ... I think it's important that we do all act as a community online and support each other.