Beowulf: Fleshing out a hero 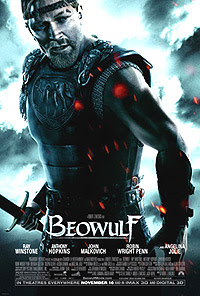 The new movie treatment of the Old English epic Beowulf is a superficially interesting but ultimately flawed creation, just like the hero whose exploits it portrays. The retelling is very modern in its sensibilities and techniques, but it can't quite capture the magic of the source verse. It tries to flesh out the man behind the ancient warrior, but lacks the warmth and insight to add depth to its special-effected vision.

The major selling point for the film is that it's the latest generation of 3D technology shot using performance-capture-suited, big-name stars. Unfortunately the theater near me wasn't equipped to show it that way, so I didn't get to experience the movie as the director intended. I've read that the switch to digital projection is becoming more economical, but in the big city of Chicago a large majority of theater owners still haven't done so.

In 2D, the movie's visuals aren't strong enough to counteract the sophomoric humor and sight gags into which its story occasionally devolves. The screenwriters do attempt a post-modern spin on the hero's legend, but the ideas aren't weighty enough to lend it real heft. The animation in fact robs most characters of their humanity, reducing them to smoothed over, plastic action figures. In many ways, Grendel, Beowulf's troll-like first foe, has more physical and emotional depth than any of the leads.

One of the film's major themes is the disparity between myth and reality, and how the power of legend often trumps the need for truth. That's not a new idea, but it is a clever justification for the writers' twist on the traditional telling of Beowulf's story. They undermine the glory of his youthful acts in order to endow his final self-sacrifice with more meaning. Given the span of time the action skips over in the interim, it's hard for the audience to buy into that spiritual growth.

An interesting subtext is the tension between Pagan and Christian beliefs that bleeds through from the original epic poem. Beowulf is a pre-Christian Germanic tale that was passed down orally among the Anglo Saxons before being codified in written form with religious embellishment, perhaps by an 8th century monk. The film's grayed and weary Beowulf laments the lapsing of the age of heroes to a time dominated by martyrs. Ironically, at story's end he seems to embrace the very role he deemed shameful, as the distinction between martyr and hero becomes blurred.

The film isn't the most thoughtful meditation on the nature of heroism, but it should bring renewed attention to an important piece of our literary heritage, and that's a good thing. The Answers.com article on Beowulf has a nice summary of the original plot and great background information, including several external links to the full verse.
Posted by Francis Scudellari at 10:02 PM

Francis
Thanks for this review and the link. I'm planning to see the movie myself so this background info and review will certainly hope. Cheers.
~JD

Thanks for the review. When I saw the trailer in the movie theater, I wondered about some of the same things you brought up. I'd decided not to see it..mainly because I don't really care for the computer generated actors. I think it looks so strange..just give me the real people, please.

Hi Nick,
Thanks for the tag. I've got a couple other memes I need to deal with too, so I'll try to get something up soon.

Hi JD,
I definitely recommend seeing it in 3D if you can do so. I don't think it warrants the expense otherwise. I actually may go see it again just to see if the 3D improves the visuals significantly. They have an IMax screen downtown that's showing it.

Hi Lisa,
I'm not a big fan of the in-between animation style either. It's very much like watching a video game. I prefer my animation much more abstractly stylized, or like you I'd rather have the real people.

I have not seen this yet, but it comes highly recommended from someone who's movie going opinion I respect, and now I am torn. (After seeing the previews I decided I did not want to see it).

Hi Dave,
It's one of those movies that has things I both like and don't like. Grendel and the Dragon are worth seeing on the big screen, and might even better in 3D. That said, if you fork over the $10 and don't like it, don't blame me :).