No Country for Old Men: Cruel and unusual entertainment 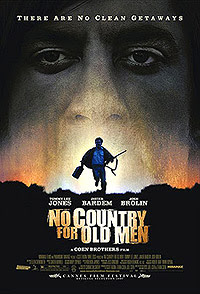 I've always been a big fan of the films of Joel and Ethan Coen, so I eagerly went to see their latest No Country for Old Men based on the Cormac McCarthy novel of the same name. I don't want to say too much about the movie and spoil the experience of it, so I'll keep my review short and simple.

There are good movies, and there are great ones. This film definitely falls in the latter category. It can be bleak and bloody at times, but there's also a very dark humor to it. As Sheriff Ed Tom Bell remarks to his deputy, you can't help but laugh at the overwhelming absurdity of it.

The scenes are amazingly crafted with stunning visuals and dead-on performances. Javier Bardem is especially notable as the black-clad, reaper-like assassin Anton Chigurh whose cold-hearted presence dominates even the frames he doesn't inhabit. Tommy Lee Jones as Sheriff Bell, and Josh Brolin as Llewelyn Moss are also very good.

There are moments that brought to my mind earlier Coen brothers' projects such as Fargo, Blood Simple, and Barton Fink, but No Country is its own strange animal. A meditation on good and evil, life and death, human venality and supernatural cruelty, random misfortune and chosen fate, it's a film that I'll see again so I can try to understand it on a deeper level, especially the enigmatic ending. Just watching the trailer re-whetted my curiosity ...

Posted by Francis Scudellari at 12:07 AM

Now I'm torn. I want to see the movie because the Coen brothers did it. But I didn't know it was based on a Cormac McCarthy novel, and I think Blood Meridian is one of the worst novels ever penned. Ah, what the heck, I'll probably go see it anyway. If anyone can fix that hack McCarthy's stuff, it's the Coen brothers.

If you've liked the other Coen brothers' films, you should definitely like this one. It's not a comfortable movie to watch, but they do some very interesting things visually.

Francis
I see you're still adding to my to do list. :-) I just got my hands on Umberto D. Plan to watch it on the weekend. Now I'll have to check out this movie. I'm looking forward to both. Cheers!
~JD

Hi JD,
I hope my continually extending your to-do list doesn't discourage you from reading future posts :). I've got a lot on mine now too.