In praise of Elijah Lovejoy 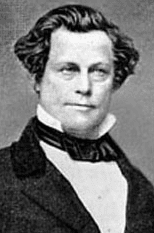 Today marks the 205th anniversary of the birth of Elijah P. Lovejoy, an abolitionist and martyr to the cause of free speech. Lovejoy is not a man whose history most American's know, but they should.

It's because of the courage of those like him that we're able to enjoy the freedoms that we do today, and he should serve as an inspiration to keep vigilant against the contemporary forces of hate, racism and bigotry that try to silence opposing voices through forms of intimidation both physical and psychological.

Lovejoy took it upon himself to do journalistic battle against the institution of slavery in Missouri 30 years before the Civil War. He was a religious minister who applied the moral lessons of his faith, and he used the Observer newspaper he founded in St. Louis as a pulpit to make his readers aware of the brutality perpetrated against African Americans.

Forced by angry mobs to flee across the river to the free state of Illinois, Lovejoy's calls for abolition became more radical and his dedication to the publication of his paper more resolute. Suffering the destruction of three presses, he eventually lost his life defending a fourth. News of his death sparked the abolitionist movement and helped propel the nation on its inevitable path toward a civil war over the most basic right to human freedom.

On this date it's worth commemorating the start of that short but meaningful life lead by a true American hero.
Posted by Francis Scudellari at 8:23 PM