Whenever I'm mired in an emotional or creative funk, I always find it productive to step back and focus on the bigger picture. There's no better way to do that then to peruse the images captured by NASA's orbiting telescope — an eye in the sky with the widest view of all. 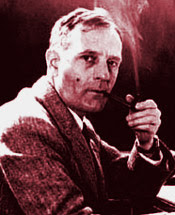 The space agency's high-tech camera is named after Edwin Powell Hubble (pictured at left), and today coincidentally (if I can maintain the veneer of happenstance for the sake of this post) is the anniversary of the great astrophysicist's birth in 1889.

Edwin Hubble is credited with providing the first observational evidence to back the theory of an expanding universe. I'm not the most scientifically inclined writer, so check out the above linked article on him to get a better understanding of his accomplishments.

In short, based on his measurement of the wavelengths of the light emitted by distant galaxies, Hubble showed that these far-flung stellar systems were in fact moving away from our home here in the Milky Way. He also created the system by which galaxies are still classified.

Below is one favorite image from the multi-media section of NASA's HubbleSite. It depicts a "giant star-forming nebula with massive young stellar clusters" about 20,000 light-years away from us. It's hard to imagine a more beautiful sight, and it's too bad that Edwin Hubble didn't live long enough to share the experience of so clearly peering into the lovely mix of light and matter to which we belong.

This awe-inspiring glimpse given to us by Hubble's work provokes a contradictory mix of emotions — I feel at once rendered insignificant by the infinite starry vistas and raised up by our intimate connection to such a marvelous and vast creation. 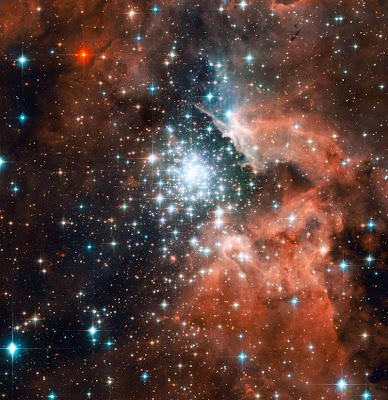 Posted by Francis Scudellari at 9:56 PM

True Francis. I couldn't agree with you more on your closing statement. Thanks for the link to the Hubble Site. I didn't know it existed.
Great post once again.
~JD

Thanks JD,
I've always been a bit of a space geek, but I need to educate myself more on the science behind it ... of course that's still evolving. I know some folks think we shouldn't be spending so much on NASA, but I think they do some wonderful things.

I have gone from a mere ant upon the ground to as you described, “feeling like an atom swirling around in the nebula.”

Your post is a reminder to me that knowing we all are apart of the bigger picture is nostalgia at its best.

It's pretty cool to think we're made of the same stuff as pictured in those images from Hubble.