St. Augustine: Damned from the start? 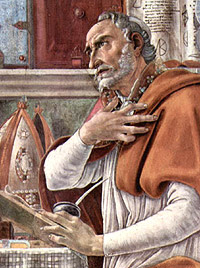 On November 13th, 354 AD Aurelius Augustinus entered this world destined for damnation, but by the grace of God and the miracle of baptism he was transformed into a saintly philosopher. That's how the man who would become better known as St. Augustine of Hippo confessed it in his autobiography, and it's his soul crushing theological views on Predestination and Original Sin that won out in the battle over Christian doctrine.

Born to a Christian mother and Pagan father in Roman controlled North Africa (present-day Algeria), Augustine was fascinated with classical philosophy from an early age and shifted his views between several "heretical" streams of thought before falling under the spell of the prevailing Catholic hegemony. He put forth a negative interpretation of human nature that allowed the Church to assert itself as the necessary component of personal salvation, and then he set about silencing those who emphasized humanity's free will.

It's interesting to ponder the "what if" of the Church having embraced the philosophies of those the Saint's pessimism intellectually vanquished. Insisting on the literal veracity of the Fall of Adam, and believing that our first father's self-inflicted soul sickness was hereditary, Augustine took the concept of predestination to such an extreme as to condemn to damnation even unbaptized infants who hadn't had the chance to sin.

In his eyes, a life devoted to good works of love and compassion was worthless without the holy sanction of ablution. Grace was bestowed through the Church, not earned outside of it. Of course that's a convenient theological position to stake out if you're goal is to guarantee the survival of a religion as a political and social institution.

I find much more appealing the teachings of Pelagius, who Augustine had excommunicated from the Church. The British born monk emphasized humanity's ability to shape our destiny through our choices. Rather than attributing sin to an inbred spiritual flaw, Pelagius affirmed our capacity to recognize good from evil and take responsibility for the decisions we make. That's a world view certainly much more in line with modern sensibilities.

The illusion of predestination is just a philosophical conceit to avoid social accountability. Today, there's a lot riding on the course we choose as a society. We have an opportunity to achieve much by working together with a common purpose. If we fail that challenge it will be due to a stubborn refusal to cast off our selfishness, not an ancestor's wayward choice in fruit.

Note: The above image is a detail from the painting of Augustine by Sandro Botticelli, c. 1480
Posted by Francis Scudellari at 10:35 PM