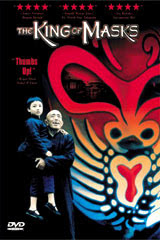 Tonight I watched a wonderfully moving 1996 Chinese film called Bian Lian (King of Masks), from which my always interpretive mind was able to make some interesting social connections and distill a small dose of wisdom. I knew very little about the movie before popping the DVD into my player, as I added it to my queue based on a NetFlix generated recommendation, so I was very pleasantly surprised by it (chalk one up to the powers of collaborative filtering).

It's a visually striking and mentally provocative look at gender roles and the limits society places on some members' contributions, to its own detriment. Tradition has its place, but times inevitably arise when we have to break free of a blind commitment to old ways or get pulled down under their weight.

The performances are uniformly good, especially that of the young female lead (not to mention the well-trained monkey sidekick). My very cursory plot summary follows, so if you'd like to embark on the viewing experience with a similarly clean-slated perspective, come back to read the rest of this post later.

The deceptively simple story centers on an aging Wang who very proudly proclaims himself the "King of Masks" as he travels the streets of China performing his dying art of Sichuan — a combination of dance and magic that features a quick changing of faces via sleight of hand. The rigid social rules of his time demand that Wang only pass his craft down to a male heir, but because he lost his only son to illness at age 10 his legacy is endangered. Denied of the possibility for a blood relation, at his wits end, Wang seeks to buy a boy on the black market.

Even that proves a challenge in a society where males are prized and females discarded, but in a bit of seeming serendipity he chances upon an 8 year old child he thinks may be his apprentice. At first, Wang is very affectionate and encouraging to this heir apparent he tenderly calls Gou Wa (roughly translated to "Doggie"). When through circumstance he discovers that Gou Wa is really a little girl, forced to mask her own identity to avoid rejection, the story turns darker and Wang colder.

In his travels Wang befriends a famous actor named Liang who sings the female parts in operas, adding to the gender bending and role playing themes of the film. Liang is best known for his portrayal of a self-sacrificing princess, who upon death becomes the redemptive Buddhist figure of Bodhisattva. Wang takes Gou Wa to see Liang's performance in that role, and its a foreshadowing of her own part to play in Wang's life.

Through her extreme filial dedication and selflessness, Gou Wa overcomes Wang's chauvinism and proves herself a worthy heir to his art. The King of Masks is forced by misfortune to recognize that the only way he can salvage his legacy is by renouncing the outdated and senseless obligations of tradition, and embracing a new possibility informed by his love of Gou Wa: the Queen of Masks.

It may not seem that we have much to learn from a story set in the tradition-bound and superstition-clouded world of 1930s China, but The King of Masks is an elegant metaphor for the stark choice we too face. We have our own customs and attitudes that are shaped more by a slavish obedience to the past than the forward-thinking compassion necessary to preserve our highest ideals. We can continue to blindly observe self-defeating practices that risk a lost legacy, or we can break free of those limiting rules and redefine our social roles to encourage the greatest contributions from all of us.
Posted by Francis Scudellari at 11:50 PM