Exploring Tasmania: the devil is in the details 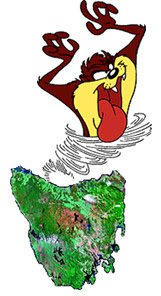 I have to admit a general ignorance when it comes to the history and present day details of the island of Tasmania. I even had no clue to the identity of the man for whom the Australian state was named. So my curiosity was peaked when I saw that on November 24, 1642 a Dutch explorer named Abel Tasman was the first European to spot the spit of land.

Tasman claimed and named the island Van Diemen's Land in honor of his sponsor, the Governor of the Dutch East Indies. The "discovery" eventually proved costly to the indigenous people — a common theme throughout the history of European colonization.

In 1803, the British established a penal colony on the island, like its neighbor to the north, and the population who had lived there for millennia was decimated over the next few decades. Upon being granted self-government from the Brits in 1856, the settlers rechristened the land Tasmania to mask the twin black eyes of its penal past and the aboriginal extermination.

Scion of the TV age that I am, my first introduction to the state's current name came from watching Bugs Bunny cartoons as a kid. The rascally rabbit outwitted the whirling dervish of a nemesis nicknamed Taz in the loony 'toon "Devil May Hare," which debuted in 1954 and is available for your viewing pleasure via a YouTube clip.

As you might guess, the real-life carnivorous marsupial bears little resemblance to the Warner Brothers depiction, other than in its big appetite. In fact, they're kind of cute (take a peek at the clip of a yawning devil below) when they're not fighting each other to chow down on a carcass. Sadly, the Tasmanian Devil numbers are declining due to the spread of a disfiguring disease and other ecological factors. Let's hope they fare better than the other native populations who have disappeared.

Posted by Francis Scudellari at 12:39 AM

Interesting Francis,
My first introduction to the name "Tasmanian" also came from watching the Bugs Bunny cartoons as a kid. Taz was my favorite right up into my later adult years when for some reason I decided auto mud flaps and floor maps adorned with this carton character were "cool". That didn't last long. This post was great. I always wondered how the name Tasmanian came about. Well, now I know :-) It's unfortunate that disease, man's encroachment and environmental problems are causing the decline of this marsupial. You are right when you say "let's hope they fare better than the other native populations that have disappeared."
~JD

Hi JD,
My first introduction to a number of classical music pieces also came via Bugs Bunny .... another of my shameful secrets :). I've always found the various marsupials still living in Australia to be pretty interesting creatures. I'd like to go see them some day, but most likely it would be in a zoo and that's a bit depressing.