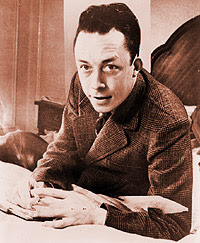 Anticipating the anniversary of Albert Camus' birth on November 7th, I decided to re-visit his short novel L'Étranger (The Stranger) and its disturbing portrait of modern alienation.

Written during one of the bleakest moments in Western history, when Europe seemed on the brink of falling under the brutal rule of Fascism, Camus' work is in form a sparsely worded crime story, but with content informed by a deeply dark philosophical argument.

Considered a quintessentially "absurdist" story, those who have read it will always remember its first lines, which speak to the narrator's apparent indifference:

The unsympathetic voice is that of Monsieur Meursault, a man whose first name we never learn, and a character very difficult to understand. The events that flow forward from this pivotal moment of the announcement of his mother's death seem in some sense predestined, but that's an easy conceptual trap to fall into when listening to this retelling by a doomed man mentally retracing his steps.

Within the foggy recollections of his condemned mind, often more aware of the heat and monotony of the fateful moments that propel him toward his end, Meursault can't clearly discern his own motives and emotions. The people around him wait for him to react in a certain way, to feel and believe the things that imbue their world with order and meaning, but in his dedication to a kind of pure metaphysical honesty, he remains always outside those expectations.

Rejecting religion and social custom, he strikes more fear in the hearts of those trying him than the father-killer whose case is being prosecuted at the same time. The human mind can easily grapple with the concepts of good and evil, love and hate, guilt and redemption; but we all recoil from a moment's glance into the depths of utter ambiguity. Society prefers stereotypical villains with clear-cut or ill-willed agendas, rather than the more monstrous prospect of actors who force us to peer with them into the moral abyss of an uncaring universe.

Meursault finds significance in his memory of a Nurse's comments to him during the long and oppressive funeral march:

Elle m'a dit: "Si on va doucement, on risque une insolation. Mais si on va trop vite, on est en transpiration et dans l'église on attrape un chaud et froid." Elle avait raison. Il n'y avait pas d'issue.
(She said, "If you go slowly, you risk getting sunstroke. But if you go too fast, you work up a sweat and then catch a chill inside the church." She was right. There was no way out.)

It is that sense of hopelessness that pervades Meursault's story, and it makes Camus' novella a very uncomfortable read. In dark times, it's easy to fall victim to an alienating sense of powerlessness. I think it's Meursault's passivity throughout that condemns him, however, and not the fickle and chaotic workings of a meaningless world. The truly noble course to take is the one in which we pursue what is good and just, even without guarantee or solid expectation of success.

Sleepwalking our way through life, making only those choices that fall to us as we bounce from moment to moment side-stepping the obstacles that fate tosses in our path, will inevitably lead us to sadness. We can avoid succumbing to that black trap of meaninglessness by choosing instead to willfully commit ourselves to acts of love and compassion.

Meursault sees only a universal absurdity as he tries to accept the randomly cruel happenstance that led him to tragedy. I choose to believe that our world takes on the shape and meaning we creatively imagine for it. Hope and meaning are intertwined, and Meursault's life has lost both by the end of this tale. I don't know if that was Camus' perspective, but it's what I'll take away from the experience of reading his words.

Note: The English text used here is from the Matthew Ward translation of the book.
Posted by Francis Scudellari at 1:32 PM

Your writing makes me feel as if I should put more effort into mine. You are so articulate. I've not read The Stranger, although I've read much about Camus' work.

My former career was in great part an act of love and compassion. And I know that to do it well, one must approach it with that intensity. In the end, I was too weak, too spent. And I gave in, having to admit that I could no longer give.

It's odd that in spite of all that one can accomplish in that regard, afterward, all one is left with is what was not accomplished.

You've got my curiosity up enough to take a look at the book.

Hi Kelly,
Thanks so much for the compliment! I'm definitely better at giving out advice than following it. It's hard to keep up the intensity for any endeavor, and I definitely think we should be proud of whatever we can accomplish. The Stranger is worth reading, but I liked Camus' The Plague better.

When one see thing in deep, find everything is no more no less than a holly trinity.

Is the duality of everything plus you. Everything have an oposite, which is not allways the contrary.
Even you, yourself, have a "oposite" - the image in the mirror. Again trinity - you, the image, the mirror.

Mersault is the Camus from a paralel universe, exposed to "regular" world using concepts people are able to understand - absurdism, indifference, ambiguity, unpredictibility ...

Hi JD,
Thanks for the comment. I actually have a 3 volume set of Camus' novels and will be attempting The Fall next. I've been enjoying the poetry and fiction at your site and will have to do some backward exploring there.

Hi Valentin,
I'll have to ponder that concept of trinities a little more. I've always been interested in the idea of parallel universes, especially from a quantum point of view, where all possibilities exist simultaneously. I've been reading a little more background on Camus, and didn't realize he contracted TB right before writing The Stranger. As to the mirror, how do I know I'm not the image's opposite :).

As to the mirror, how do I know I'm not the image's opposite

You can`t know, `coz :
- you, deep inside, you`ll never accept you are the "copy";
- oposables are equally valuable;
- which one is the "original", that only the refference system can know (even if is a subjective choice). In this case, reference system is the mirror, so go ask it ... mwuahahahahaha

I asked the mirror, but all it wanted to talk about was some chick named Snow White.

I do love Camus. I think The Plague is perhaps the perfect novel. It's flawless. With most novels, you read it and, especially if it's by a genius like, say Faulkner, think "it's brilliant, but I could fix this or that . . ." Which gives us such brilliant writers as Toni Morrison, who took all the things that works and used them to write her novels (vs. Cormac McCarthy, who took all the stuff that failed and based his novel writing on that). But with The Plague, I put the novel down and thought, "There's nothing else to be done."

I've just started the Fall, and I may go back and re-read The Plague. I agree, it's an great piece of literature.