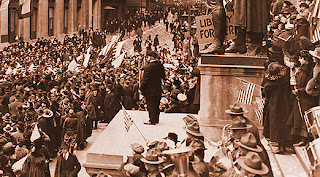 Thoughts straddling the boundary between the actual and observed Veterans Day, I chose to use the time to meditate on the subjects of war, peace and heroism. The service proffered by my father, grandfather, uncle and several close friends comes to mind on the occasion, and I hope my words honor them in some way.

Until 1954, November 11th was known as Armistice Day in the U.S. and marked the end of World War I on that date in 1918. For the past 50 odd years it's been re-christened and re-purposed here. Speechifying politicians use the day more to promote militarism than commemorate peace, especially in times of war such as our own. Most of these orators won't have ever served in any hostilities.

None of the veterans I've known can discuss their times in combat with anything better than mixed emotions. Warfare is a deeply scarring experience. Mythologist Joseph Campbell discussed soldiers in the context of "the hero's journey," and he emphasized that no matter how we judge the political motives of a war, those who fight it do so from the belief they are sacrificing themselves for a greater cause.

It's because of that very nobility of spirit we should hold up to close scrutiny the politicians who send our loved ones off to fight their battles. To take advantage of the heroism of these young men and women for selfish political or economic ends would rank among the most shameful acts. For the press and voters to blindly acquiesce to a leader's call for war without asking hard and penetrating questions is equally inexcusable. I leave it to the reader to decide if either applies to events present and past.

Besides the soldiers who wage war, I'd also like to remember the martyrs who sacrificed themselves for peace. Sometimes our misleaders' stubborn refusal to admit a mistake can only be overcome through persistent protest on the home front. As with those sent overseas, these veterans of the anti-war movement fought for their ideals and often put themselves at risk.

Coincidentally, November 12th is favorite musician Neil Young's 62nd birthday, and he penned a moving tribute to just such heroes for peace: the four victims of the Kent State Massacre.

Tin soldiers and Nixon coming,
We're finally on our own.
This summer I hear the drumming,
Four dead in Ohio.

Gotta get down to it
Soldiers are cutting us down
Should have been done long ago.
What if you knew her
And found her dead on the ground
How can you run when you know?

Gotta get down to it
Soldiers are cutting us down
Should have been done long ago.
What if you knew her
And found her dead on the ground
How can you run when you know?

Tin soldiers and Nixon coming,
We're finally on our own.
This summer I hear the drumming,
Four dead in Ohio.

Note: Image from New York Times photo with caption "Thousands gather at the Subtreasury Building on Wall Street during Armistice Day, 1918."
Posted by Francis Scudellari at 1:46 AM

I honor those women and men who dedicate their lives to a cause.

And, like you, I hold accountable those men and women who require the sacrifice.

I hold the vision that there is another way, and someday we will embrace it!

Thank you for this Francis,

Hi Jen,
For me the hardest nut to crack is figuring out how best to contribute toward that other vision in a world where the leaders are manipulating us for their own narrow ends. I think it's necessary for the ideas to percolate up from below and I believe the Web is the perfect tool to do that. Let's hope so :). I know sites like yours have given me more optimism that things can change for the better.

This is one excellent post! Stumbling through fuelmyblog, I caught your site once again and didn't even realize you were the author!

I been behind a bit with posts, but I would love to spotlight this post, hopefully today.

How can I not feel a comaradrie when you mention two of my favorite people in one post, Campbell and Young!

Hi Danielle,
I'm glad you stumbled upon me again too! I'm off to check out your blog again now. Please feel free to spotlight anything of mine you like :). It's always exciting to find kindred spirits.