Praying for rain and other idol pursuits 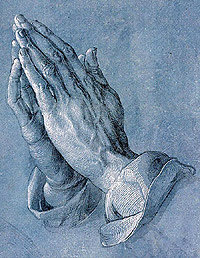 In a brilliant demonstration of true political leadership, Georgia Governor Sonny Perdue cast aside all pretense at worldly solutions to the state's water crisis and threw himself down before God in hopes of divine intervention (see Georgia governor leads prayer for rain from the Los Angeles Times for the details of his plea). Adding to the irony of the strange event is the fact that the rain-seeking pol's first name is Sonny.

I'm sure his folks named him for either a happy disposition or childlike nature, not his ability to shed light. The causes of Georgia's drought are no doubt complex, and the desperate situation may incline the locals toward miracle solutions, but our elected officials should be addressing policy changes not supernatural entities. Georgia's, and the rest of America's, shameful misuse of resources might well deserve penance and the invocation of God's mercy, but the first step to forgiveness is always amended behavior.

For far too long we Americans have engaged in the profligate burning of fossil fuels; not caring about the repercussions of our selfish actions. The reckless disregard of our land, air and water is finally catching up to us. Decades of blackening the sky with our filth is disrupting weather patterns so that some get flooding while others get drought.

Casting economic development in the image of our true savior, we've built sprawling suburbs that replace filtering wetlands with impervious blacktop. As monuments to our vanity, preferring the semblance of a neatly ordered world, we've topped the earth with insatiably thirsty, well-manicured lawns. Bowing down before their new gilded idols, our politicians have sacrificed we constituents to the ravenous appetites of corporations and granted them as tribute the right to dump waste and toxins into our fresh water supplies.

Georgia is a good demonstration of the false pride of our old ways. What good is it to have big houses, fancy cars and booming digital TVs if we don't have fresh water to drink, or clean air to breathe. Governor Perdue may think he can fool us with a deathbed conversion to conservation, but we'll need to see more action and less self-flagellation.

I've always found it interesting that some people view prayer as a way to curry favor with God. There's a wonderful naiveté in the bargaining that takes place. These supplicants usually say they believe in an omnipotent and omniscient God, yet they think they can mouth a few flowery words and make an idle promise or two to trick their supreme being into granting a reprieve.

I'm not a religious man, but I do believe in a spiritual universe. The best way to praise the divine is through inspired, compassionate action not empty words. The first step is to rededicate ourselves to respect the creation that we've abused for so long. Then we can stop perpetuating our own selfish comforts at the cost of the world's suffering.

It reminds me of an old Randy Newman song, and although I don't completely agree with the singer's biting attack on the religiously minded, there's much truth in his criticism of those foolishly looking for change to come from above rather than from within.

God's Song (That's Why I Love Mankind)
by Randy Newman

Cain slew Abel, Seth knew not why
For if the children of Israel were to multiply
Why must any of the children die?
So he asked the Lord
And the Lord said:

I recoil in horror from the foulness of thee
From the squalor, and the filth, and the misery
How we laugh up here in heaven at the prayers you offer me
That's why I love mankind

The Christians and the Jews were having a jamboree
The Buddhists and the Hindus joined on satellite TV
They picked their four greatest priests
And they began to speak
They said "Lord a plague is on the world
Lord no man is free
The temples that we built to you
Have tumbled into the sea
Lord, if you won't take care of us
Won't you please please let us be?"
And the Lord said
And the Lord said

This is my home state. Part of the battle is over the water rights to a very large man made lake in my home county of Hall. The lake is Lake Lanier. Lake Lanier's water is pumped for use by most of Ga and also parts of Alabama. Perdue is in a fight with Alabama to get them to stop taking the water. GA is really in trouble. I don't know what the solution is.

It's interesting actually..the water rights issue. We have the same thing in Nevada. Clark county has all kinds of schemes to pull ground water from the northern countries down to Las Vegas.

I'm afraid it's only the beginning and in the end it will be a battle that will turn neighbor against neighbor.

Your essay is so well written and thought out..you're right on the mark.

Thanks for the background on the issue. I've heard that water rights might be a very contentious issue in the future. We're lucky here in Chicago because we have a huge fresh water lake to draw from.

There are occasionally rumors that corporate entities are trying to buy rights to parts of the lake. And as was pretty widely publicized BP is dumping some nasty chemicals into it. So there's no room for complacency.

I'm with you... we create the problems and think some divine being is going to come in and clean it all up! ARRGGHHH....

Thanks Francis.. you are a fabulous writer and thinker!

Thanks so much Jen. I was expecting some negative reactions, especially with the sentiments of the song lyrics, so I'm glad it was well received.

I think my writing and thinking have improved a lot through this experience of blogging and interacting with such great minds as yours.

All I can tell you is that you are a fabulous writer!

I feel honored to be one who can partake of the beauty of your words! :-)

I too have had the experience of posting something I thought would be somewhat controversial only to have found it well received.

Maybe we like to hear others put into words what we are thinking but don't have the words to express?

Thanks for your thoughts Francis...

I've always been surprised at how receptive my readers seem to be ... at least the commenters. Maybe its just that I don't reach a wide enough audience to attract those with an opposite opinion.

Thanks for the compliments. Of course you know the admiration is mutual.