Let's drop the big one now 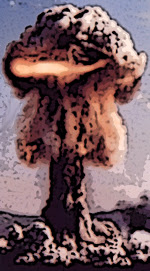 The Clinton-Obama feud reached new heights of inanity as the Hillaryites continued their attacks on the Barackers over his foreign policy experience. The latest flap erupted over remarks Obama made ruling out the use of nuclear weapons in the pursuit of Al Qaeda.

I'm certainly not a traditional political wonk, but swearing off first-strike nuke attacks doesn't seem like a very radical or unreasonable position to take. In a country where the public policy debate has been shifted so extremely to the right, however, even the Democratic leadership has convinced itself of the need to do at least a modicum of warmongering in order to capture the "middle." It's the winning strategy that garnered such success for both Gore and Kerry — passing themselves off as a kindler, gentler Bush. Maybe another loss in 2008 will illustrate to the Dems just how quickly that middle is being pulled apart toward opposing poles.

Here is Ms. Clinton's badly confused attempt to promote an appropriately tough presidential posture while not alienating the left too much, as quoted in the New York Times article Nuclear Weapons Comment Puts Obama on the Defensive:

I might be remembering my history incorrectly, but I don't recall an official policy embracing nuclear first-strikes until George II took the reigns of empire. For it to be echoed even half-heartedly by the leading Democratic candidate certainly doesn't inspire much hope for the post-Bush era.

The absurdity of the empty but scary machismo brings to mind an old Randy Newman tune written at the height of that Cold War era. Maybe Hillary can adopt it as her new campaign song, and really get those red state voters to take notice.

No one likes us - I don't know why
We may not be perfect, but heaven knows we try
But all around, even our old friends put us down
Let's drop the big one and see what happens

We give them money - but are they grateful?
No, they're spiteful and they're hateful
They don't respect us - so let's surprise them
We'll drop the big one and pulverize them

We'll save Australia
Don't wanna hurt no kangaroo
We'll build an All American amusement park there
They got surfin', too

Boom goes London and boom Paris
More room for you and more room for me
And every city the whole world round
Will just be another American town
Oh, how peaceful it will be
We'll set everybody free
You'll wear a Japanese kimono
And there'll be Italian shoes for me

Thanks for sharing the clip ... it's amazing how well the lyrics resonate with the current political environment. Dr. Strangelove is one of my favorite movies.